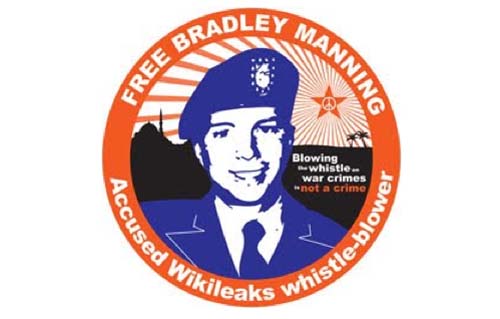 Although he remains locked away in a tiny prison cell, Private First Class Bradley Manning has just been nominated for the Nobel Peace Prize. Manning is alleged to have released many documents to the international whistleblower site Wikileaks, including the horrific “Collateral Murder” video. The military footage depicts United States soldiers in a helicopter callously and gleefully killing a group of unarmed Iraqi civilians and Reuters journalists.

The 23 year-old U.S. Army soldier has been accused of leaking classified information, and Bradley Manning has been imprisoned since May of 2010 without yet being brought to trial.

Members of Iceland’s Movement of the Icelandic Parliament group explained that they were compelled to put forth Manning for the prize because it is vital to recognize how the courageous efforts this individual made have positively impacted the peace process in our world.

Here is the Icelandic group’s letter to the Nobel Peace Prize Committee:

We have the great honor of nominating Private First Class Bradley Manning for the 2012 Nobel Peace Prize. Manning is a soldier in the United States army who stands accused of releasing hundreds of thousands of documents to the whistleblower website WikiLeaks. The leaked documents pointed to a long history of corruption, war crimes, and imperialism by the United States government in international dealings. These revelations have fueled democratic uprising around the world, including a democratic revolution in Tunisia.

According to journalists, his alleged actions helped motivate the democratic Arab Spring movements, shed light on secret corporate influence on our foreign policies, and most recently contributed to the Obama Administration agreeing to withdraw all U.S.troops from the occupation in Iraq.

Bradley Manning has been incarcerated for well over a year by the U.S. government without a trial. He spent over ten months of that time period in solitary confinement, conditions which experts worldwide have criticized as torturous. Juan Mendez, the United Nations’ Special Rapporteur on Torture and Cruel, Inhuman and Degrading Treatment or Punishment, has repeatedly requested and been denied a private meeting with Manning to assess his conditions.

The documents made public by WikiLeaks should never have been kept from public scrutiny. The revelations – including video documentation of an incident in which American soldiers gunned down Reuters journalists in Iraq – have helped to fuel a worldwide discussion about America’s overseas engagements, civilian casualties of war, imperialistic manipulations, and rules of engagement.

Citizens worldwide owe a great debt to the WikiLeaks whistleblower for shedding light on these issues, and so I urge the Committee to award this prestigious prize to accused whistleblower Bradley Manning.

Members of the Icelandic Parliament for The Movement