Recently we told you about the plight of the Swedish filmmakers who created Bananas!*, a powerful documentary which chronicles a courageous fight against the Dole Fruit Company by 12 Nicaraguan plantation workers who had been poisoned and made sterile by the corporation’s toxic chemicals. It is a classic David beats Goliath tale.

On the eve of the movie’s Los Angeles Film Festival premiere in 2009, Dole freaked out, and tried desperately to stop the documentary from ever being seen. The huge corporation attempted to sue the independent filmmakers, but eventually were forced to drop the fatuous lawsuit.

Now three years later WG Film, Fredrik Gertten and Margarete Jangård, the creators of Bananas!*, have made a new movie: Big Boys Gone Bananas!*, which recounts their victorious struggle against the giant fruit company. This important movie is about billionaire corporations attempting to suppress free speech, something that seems to be happening increasingly often. 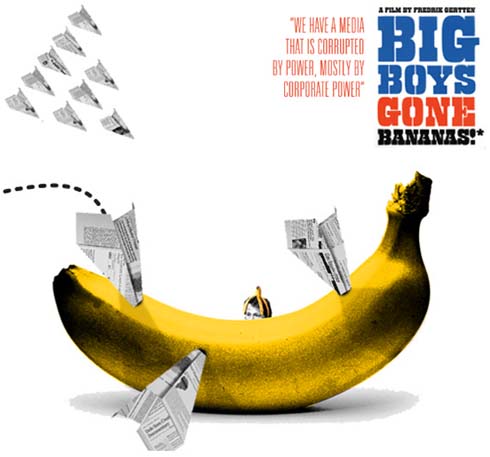 Big Boys Gone Bananas!* will premiere at the Sundance Film Festival later this month, but this compelling documentary may not ever be allowed distribution in the United States. Ironically, in order to screen the movie in this country, the filmmakers must pay many thousands of dollars for insurance, in case they might be sued.

This seems just like another very effective tool to help suppress free speech; other countries do not require such expensive expenditures. If their film is to ever be distributed here, Gertten and Jangård will need assistance. This week they launched a Kickstarter fundraising site, and have already gotten thousands of dollars in donations in just a few days. Gertten explains a bit about their years long struggle, and why they now are asking for our support:

“With the Sundance Film Festival, we’re lucky enough to have the greatest possible launch platform for BIG BOYS GONE BANANAS!*. What we don’t have is the money to pay for the initial costs of such a launch. We’re still suffering from the loss of all the time and money that went into the fight Dole had brought upon us. Against all odds, we did succeed in making my previous film available to people around the world. But this came at a huge price.

That’s why we’ve decided to reach out and ask for your help. Today, we’re launching a crowd-funding campaign on Kickstarter…

We need to raise at least $15,000 in order to launch BIG BOYS GONE BANANAS!* internationally, most importantly in the United States, the home of the people who tried to silence us. But the obligatory ‘errors & omissions insurance’ alone will cost us a fortune! And without insurance, no distribution; although, with your help, we can make it all happen. It’s just so crucial to get this film out there!”

You can view the trailer for their new film here. For more information about Big Boys Gone Bananas!*, as well as how you can get involved to help protect free speech, please visit their Kickstarter page or the documentary’s website.