South Carolina native and comedian, Stephen Colbert, announced on his program last night that he might just run for president. Recent polls already show Colbert with 5% support,  placing ahead of several candidates who have actually been actively campaigning for the Republican presidential nomination in the state.

In the wake of the Supreme Court’s “Citizens United” decision, which incredulously allows for unlimited corporate donations to influence our country’s elections, Colbert started his own very successful Super Political Action Committee last year. However, in order to become a candiate, he is not legally allowed to continue running the political organization. 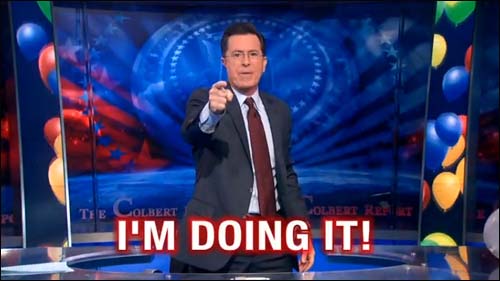 In a hilarious skit that highlighted just how horribly broken our nation’s democratic process truly is, Stephen asked his friend and fellow Comedy Central host, Jon Stewart, to take over the PAC. After quickly transferring control of his Super PAC to Stewart, Colbert then made this announcement on his comedy show:

“I am proud to announce that I am forming an exploratory committee to lay the groundwork for my possible candidacy for for the president of the United States of South Carolina. I’m doing it!”

If Colbert is able to garner at least 7% support in the South Carolina state polls, he will be eligible to participate in the upcoming Republican debate. Oh please, please, let that happen.