Did you know that the United States has over 700 military bases in foreign countries across the globe? Do you know how much money that costs us every single year? The military budget, as well as so many illegal wars and secret drone attacks, have helped destroy our nation’s economy, as well as our image across the world. Eisenhower’s stern warning to beware of the entrenched and voracious military industrial complex was indeed most prescient.

Rhodes Scholar and former AIDS activist Dr. Rachel Maddow’s greatly anticipated first book deals with how the bloated expanding military budget has highjacked our nation. Drift: The Unmooring of American Military Power will be released by Random House  on March 27th of this year. The publication analyzes the unsustainability of the distorted over-militarization of our culture, and what we must do to change course.

Unfortunately, I have not yet read the new work, but I am most eager to. I have heard Maddow repeatedly referencing its slow progress for several years, even way back on her radio show on the now defunct Air America network. 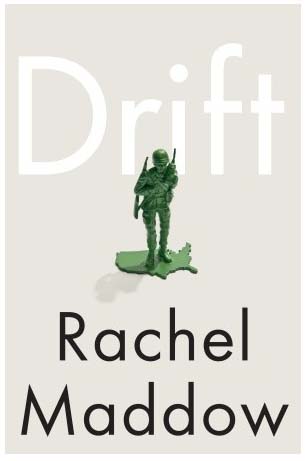 Rachel will be returning to her native Bay Area to speak about her new book at an upcoming Commonwealth Club event in San Francisco, at the beautiful Castro Theater on April 12th 2012. Here is an excerpt from the organization’s description of the fiercely intelligent Dr. Maddow:

“This year the sassy and smart-as-a-whip host of MSNBC’s politico program, The Rachel Maddow Show, joins the literary fold and takes on what she believes to be the debate between civilian life and the war machine in her new book, Drift. Whether on the airwaves or primetime cable, Maddow has never shied away from tackling the tough subjects or sparring with the most controversial characters. Can anyone forget her Sarah Palin-inspired zingers?

Now she’s taking on Ronald Reagan, the War on Terror, Dick Cheney, the Department of Homeland Security and more. In Drift, she uses her sharp sense of the political landscape to explain how American culture has become deeply militarized and why the continuous growth of our national security sector has put us in an untenable position. Join us for an organ intro, popcorn munchies, and an exclusive interview with Rachel Maddow.”

For more information about the Drift book tour, as well as all things Rachel, I recommend visiting the Maddow Fans website.