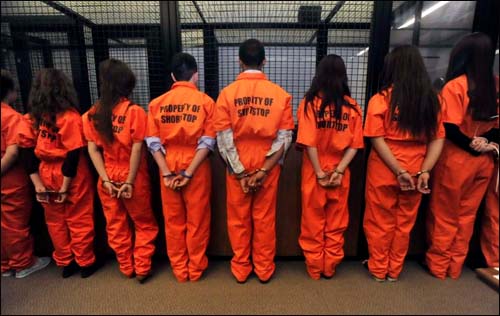 This week Governor Jerry Brown announced that all youth prisons in the state will be permanently closed. These historic child jail closures are being partially driven by budget crisis concerns, and partly as one component of larger progressive prison reforms that will be implemented throughout California.

The San Jose Mercury News reported on the historic child prison closures, and offered this insight into the governor’s reasons for instigating these smart changes:

“…Brown’s vision represents far more than just belt-tightening. Already, it’s being described by crime experts across the country as a historic proposal given the state’s size and the notorious history of its youth prisons. Wire-mesh cages, 23-hour cell confinement and brutal staff beatings are well-documented parts of that legacy.

‘California is at the front end, cutting edge of what is going to be the huge trend going forward, and that is the policy embrace of the fundamental truth that kids do better when they are near their homes,’ said Bart Lubow, who directs national juvenile justice reforms for the Annie E. Casey Foundation.”

Youth Crime at All Time Low

Juvenile crime rates have gone down dramatically in every major county in California since 1998. According to the San Francisco-based Center on Juvenile and Criminal Justice, youth crime rates in the state are now at their lowest since statewide statistics were first collected, back in 1954.

Many critics of these proposed incarceration reforms have voiced concerns that child prisoners will now all be sent to adult jails, that they will not be rehabilitated, and that the burden to local municipalities will become too great. As part of his plan, Brown has proposed giving the counties $10 million and a year’s time to aid in the transition.

It is also very important to always consider the often self-serving motivations behind some of the groups who want child prisons to remain. The for-profit prison industry is a massively influential corporate force throughout our nation. The LA Progressive offered this astute perspective on the contentious issue:

“Prisons are a government program, with the bulk of funds paying people’s salaries, paying construction companies, and paying companies that manufacture tasers, kevlar vests, and similar items. The prisoners are merely numbers reflecting expansion of budgets. Anyone wearing their Cynic Goggles will first ask: ‘Who loses in a reduction of prison budgets?’ After identifying those people, one can put their defense of the prison in perspective.”

I have experienced California’s child incarceration facilities first hand, almost three decades ago, and the institutions were horrific. I was imprisoned for being homeless, because my mother had thrown me out when I was 15. The crumbling jails had no schooling, rehabilitation or any form of education whatsoever. I spent most of my time locked away alone in a tiny cold windowless white brick room.

Once I was finally released from jail, the one and only “rehabilitation” program that was offered to me was a five week training course in how to put on make-up, allegedly to help improve our juvenile delinquent “self-esteem”. I am not kidding, this is so pathetic and sad, but painfully true.

I applaud Jerry Brown for his intelligent leadership on this issue, and I am confident that he can help create a more sustainable plan for juvenile rehabilitation than teaching girls how to properly apply lip liner.

We must start closing down all jails, including Guantánamo and the many secret black site prisons that our government is operating around the globe. Both children and adults should not be locked up in metal cages and tortured. Isn’t that obvious?