Chicago may not be the first city many people think of when they think of solar leaders — it shouldn’t be — but it has been on the leading edge of green for awhile, and a couple new announcements out of the windy city keep that trend going. 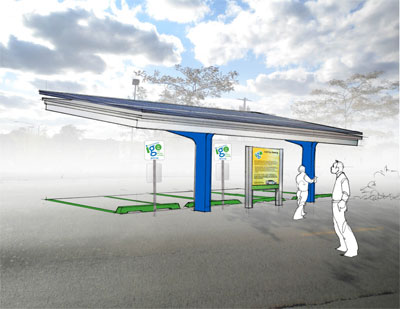 1. A non-profit car-sharing program in Chicago, I-GO, recently announced that it has launched “a $2.5-million electric vehicle (EV) project that will be the national leader in solar power for EVs.” It will include 18 solar-powered charging stations for 36 new EVs. “This will be the largest electric vehicle fleet in the Midwest, and… it will use more solar power to charge EVs than anywhere else in the country.” As the image above shows, the solar canopies will be able to cover 4 cars and will be able to charge two electric vehicles.

“Two spaces will be reserved for I-GO at each location, and the others will be available to the public,” I-GO reports. “Each canopy will be topped with 44 solar panels, for a capacity of 10 kilowatts. In aggregate, the canopies will produce about 200,000 kilowatt-hours (kWh) of electricity annually, which will power as much as 600,000 miles driven per year. As a result, I-GO and its members could save as many as 17,000 gallons of gasoline each year.”

2. Chicago is also getting the largest commercial airport solar farm in the US, a 20-megawatt solar farm at Chicago Rockford International Airport. The project may eventually scale up to 62 megawatts!

Congrats & kudos to Chicago! I’ve been wanting to visit the great city for a long time… maybe one day, and maybe I can check out these projects if I ever do!