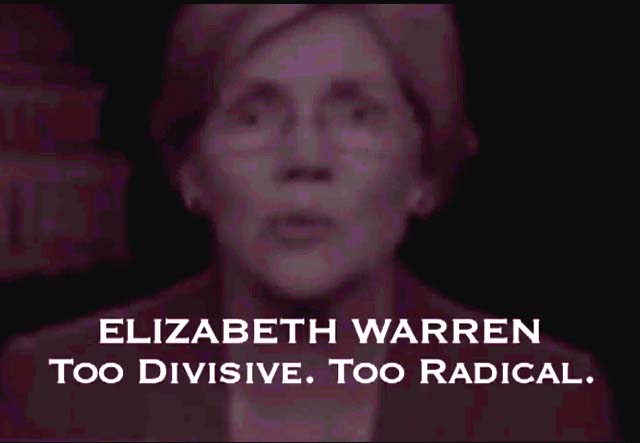 Elizabeth Warren is a fiercely intelligent, compassionate and incredibly competent woman, who is very likely to become the next senator from Massachusetts. This soon to be reality is freaking Republicans out so much that they seem to have lost touch with reality. They have just created a hilarious attack ad, complete with scary menacing music, attempting to smear Warren.

The ad is so inadvertently funny, that I have difficulty believing that it is really a legitimate commercial, and not just some kind of satirical prank. It also seems very likely to backfire, and may very well actually help Warren get elected to the Senate. The Raw Story offers this insight into the Republican Party’s delusions:

“Republicans in Massachusetts have chosen a confusing line of attack on Senate candidate Elizabeth Warren, the Democrat who helped create the Consumer Financial Protection Bureau, and is now challenging Sen. Scott Brown (R-MA).

They’re calling her, for some reason, the ‘Matriarch of Mayhem’, and suggesting that ‘Occupy Wall Street’ is somehow an ‘anti-capitalist’ movement that she secretly leads.”

This silly political video paints Warren as some kind of violent radical revolutionary leader of the Occupy Wall Street movement who throws rocks and wants blood. The extreme and ludicrous nature of this advertisement is a testament to just how massive a threat this amazing person is to the right wing establishment. A smart, assertive and strong woman who does her job brilliantly, that is definitely fodder for some terrifying Republican nightmares.