One Bank to Rule Us All

Home » Blog » Economy » One Bank to Rule Us All

Mordor, complete utter evil, and throwing the one ring into the Cracks of Doom immediately came to mind when I saw this image illustrating the rapid consolidation of all our nation’s banks. So much power, influence and money in the hands of so very few has created an inhumane Sauron like behemoth banking system whose only cruel desire is for more and more. We the people are being systematically crushed, devoured and regurgitated within the relentless grinding cogs of this corrupt unsustainable machine. 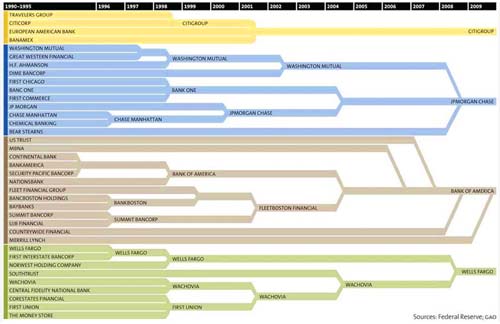 This illustration demonstrates how 37 banks have been voraciously consolidated into just four mega banks in the last two decades. And this doesn’t even represent how many more small independent local credit unions and community banks had been completely obliterated in the earlier destructive Reagan years.

When I was a kid I started my first savings account with a large jar of pennies at our small neighborhood bank down the street, which then got bought out by the now defunct UCB, later eaten by Great Western, then Washington Mutual, and eventually devoured by Chase. We now support two great local financial institutions in our city, New Resource Bank and the Mission Federal Credit Union, where we can talk and email to real people who actually know and care who we are.

Several of my friends shared this disturbing graphic, which was originally posted by Michael McCool. You can see a more easily readable larger version of the creepy image here. Perhaps this information will help inspire more of us to cut up our credit cards and to also Move Your Money out of the evil corporate chain banks like Chase, into a locally owned credit union or cooperatively owned community bank?