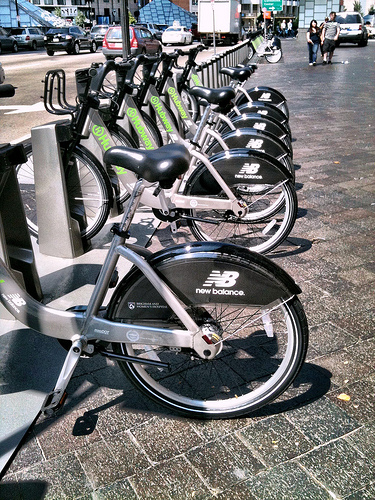 Following up on my recent post on Boston’s new and highly successful bike-sharing program, Hubway, I thought I’d direct your attention to a great post on Boston University’s news site, BU Today, in which Leslie Friday describes her experience testing out Hubway. Here’s the intro:

Anyone navigating Commonwealth Avenue knows it’s a circus. Cars, trucks, bikes, trolleys, and pedestrians barrel along and skitter across the four-lane divided avenue that is the pulsing artery of the Charles River Campus.

So it seems counterintuitive to add one more element to that mix. But, voilà: New Balance Hubway. Launched at the end of July, Boston’s new bike-share program is already being hailed as a success, with 2,600 members and 600 bikes at 53 stations around the city. Three of those stations are along Comm Ave, with another in South Campus and one on the Medical Campus. (An additional eight stations are planned in Boston, with more to come in Cambridge, Somerville, and Jamaica Plain).

Whether hopping from FitRec to class in East Campus or taking a more scenic route to downtown Boston, the bikes promise a cheap and easy transportation alternative for the BU community 24 hours a day, 7 days a week, 3 seasons of the year. (Hubway will hibernate December through February, to reemerge with the nicer spring weather.)

That sounded to me like a deal too good to be true. So I decided to test it out. Here’s a recap of my inaugural Hubway adventure.

Some rights reserved by notladj