Believing that the Earth is our god, government, economy and culture – all wrapped into one big institution – that is simple common sense!  When we draw our last breath together, all the functions of living will be mixed together in that one breath.  There won’t be separate powers anymore.

It’s not so bad if you ignore the upheavals and century storms and waves of extinctions.  Most of us haven’t made a decision about what do to.  The climate is changing and we get through another day.

Individuals in the media-saturated west have mostly made the decision to make no decision.  Our god, government, economy and culture – has made the same no-decision.  The biggest institutions are nearly silent on the question of climate change.  It is not an issue in the Presidential politics of the United States – despite 900 tornados this year, and floods, fires and heat-waves of biblical proportions.

The heads of the nation-states do not comment on the fact that the air, and water and even the ground we stand on – are now radically changing.  (Evo Morales, the native-American President of Bolivia is the only one that comes to mind.) And yet, national identity is one thing we cling to.  It is very Tea Party to say, “America is the Greatest Nation!” – but we all go along with it. 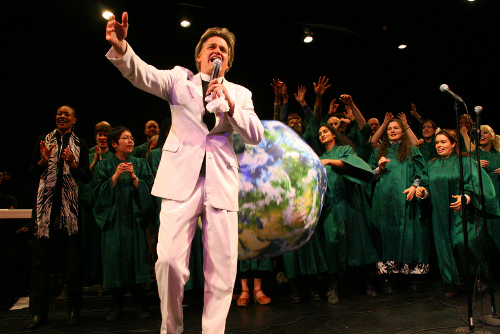 Why?  Soon millions of us will be fleeing the coastal cities.  As the sea rises and the waves get bigger, will we first and foremost be national citizens?  No – the first thing will be:  Save our loved ones from drowning, and seek higher ground.  Will each dry hill be its own self-congratulatory country?  Let’s go to the common sense again:  No, things will be a lot more chaotic then that.  It’s more likely that a world with a refugee species won’t be made of nations anymore.

We shouldn’t be made of nations now.  We should be made of what we are really made of – the Earth.  Nations, religions, economies, and cultures should no longer be separate, defensive and competitive.  There is a reason that climate change is not mentioned by the leaders.  We are already experiencing a kind of false drowning – in these many systems of belief that demand our absolute allegiance.  These traditions keep us in our dull inactivity, without access to our own common sense.  This good citizenship will kill us all!

It would be a giant leap for mankind to move forward from these old habits, wouldn’t it?  We keep hoping that a new awareness of the level of emergency will rise out of these old institutions, but we can’t wait anymore.  Now we must listen to our common sense.  And that means getting down on our knees and praying to the wind.

Then we rise and receive our instructions from the Earth.  Call our neighbors, call our friends.  Run as fast as we can to a coal-fired power plant and shut it down.