More people in the United States are using food stamps now than ever before in the history of our nation — 41.8 million Americans are currently getting food aid. The Department of Agriculture just released updated national participation numbers for food assistance programs, which show that the amount of food stamp recipients has jumped 18% from last year, and has increased 1.4% just since June.

Although this ignoble new record is not really so very surprising; our nation’s dire economic situation has caused the number of families in need of food assistance to set new records for each of the last 20 months straight. 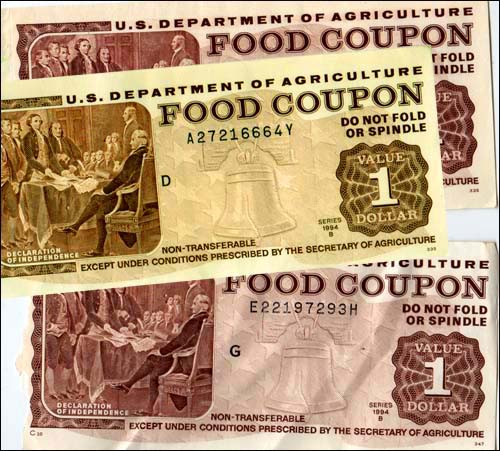 Our government’s inappropriate sudden obsession with containing federal deficits that were exploded by Bush’s tax cuts for the wealthy, as well as by several illegal wars, is very curious. The recent debt ceiling debacle was such a bizarre contrived piece of irrelevant theater that could not be more completely removed from the pain and suffering of tens of millions of our fellow citizens who are struggling just to eat.

However, the small fraction of our country who are very wealthy, the top 5% who own over 2/3 of everything, are still doing just fine, thank you very much. Randy Shaw at the LA Progressive offered this insight into how the dysfunction that has transpired in Washington reflects our elected officials’ total lack of concern for the unemployed and poor:

“…Democrats have found common ground with Republicans in prioritizing the desires of the wealthy over the needs of poor and working-class Americans. While Democrats are not nearly as zealous or extreme in their policy proposals, there is now a bipartisan consensus that budget deficits – not unemployment or poverty – are the nation’s top problem. Yet almost entirely absent from the past month’s debt-ceiling discussion was the record number of families depending on government assistance to keep themselves fed. Congress is responding to this worsening crisis by attempting to cut food stamps in order to save money, a result that may be inevitable after the debt-ceiling deal enacted this week.

While Republicans have led this war on working and unemployed people in need, top Democrats from Obama to New York Senator Chuck Schumer have either extended or fought to preserve tax breaks for the rich. Schumer has battled to ensure that those making millions form hedge funds continue to pay taxes at an artificially low rate, which has helped sharply boost BMW, Porsche and Mercedes sales and such items noted in the Times story as $250 Ermenegildo Zegna ties and $2,800 David Yurman pavé rings. Tiffany’s sales are up 20% in the first quarter, while Wal-Mart has had to reduce the size of its toilet paper packaging because many of its working-class customers cannot afford multi-pack purchases.

The gap between the rich and everyone else increased during the 1990’s, but the Clinton era also saw gains for the middle and working class and extremely low unemployment. Today, unemployment is 9.8%, the highest since 1983. We didn’t hear much about unemployment during the debt-ceiling debate, which explains why the bipartisan deal required the rich to pay nothing more – but did not extend unemployment benefits.”