The Atlanta BeltLine, dubbed, the country’s “most ambitious” or “best” smart growth project is, obviously, a big project. It involves re-purposing a 22-mile rail corridor to include new forms of public transit (streetcars or light rail connected to MARTA at a number of locations), trails for walking and bicycling, and a number of parks, all around the center of Atlanta. The city is putting $2.8 billion (yes, billion) into it and there is a ton of private investment going in as well.

Remediation of over a thousand acres of brownfields and revitalization of distressed, poor neighborhoods are also part of the plan. What is expected to come of this massive project?

A recent annual report, which Kaid Benfield of the NRDC covered in good detail, shows that park development and trails have been moving forward well as a result of the project. 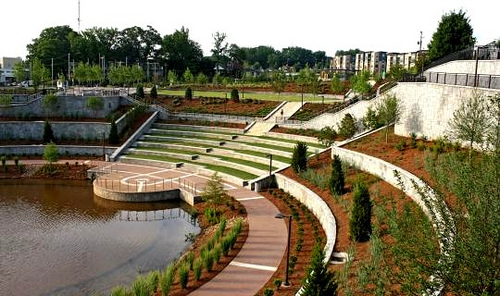 “Of the 20 pages of ABI’s report allocated to substantive accomplishment, 14 are devoted to parks and green space.  Perhaps the most impressive of the parks work to date is the new (if awkwardly named) Historic Fourth Ward Park on the east side of the Beltline (photo above, site plan below),” Benfield notes.

This park alone is 17 acres and includes a number of green features, from the report:

Transit plans are moving along as well, but it will still be awhile until any new transit services are up and running. 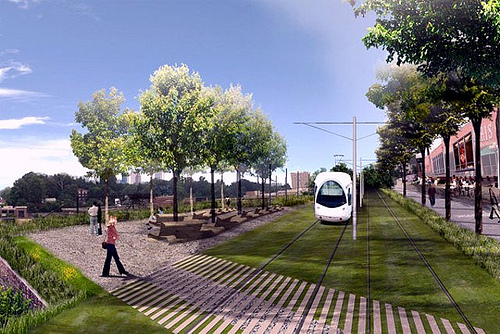 Neighborhood revitalization and workforce housing development are moving along steadily as well, but rely quite a bit on the transit projects moving along first.

For much more on this project, check out Benfield’s full piece here: The country’s most ambitious smart growth project shows some progress, much remaining potential.