The United States has now reached a most inauspicious new milestone; the distribution of wealth and resources in this nation is more extreme and inequitable than it has ever been in our country’s recorded history. I fear that if the economic disparity becomes any more extreme than it is right now, the very fabric of our civilized society will begin to unravel. Actually, lately it feels like some of our nation’s most basic infrastructure is already beginning to collapse.

In this current economic Depression the richest 5% of our populace now owns and controls 2/3 of everything. The wealth gap is so severe that it has helped to create the violently volatile and unstable economy that we currently enjoy. The Pew Research Center has just released some mind boggling income survey research which shows just how gargantuan the disparity of resources has now grown. 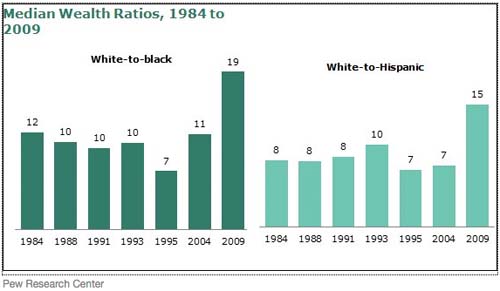 The Pew Foundation’s recent analysis of government data clearly explains just how divisively disproportionate the distribution of wealth, resources and assets has become in our country today. And though all of us (except the tiny plutocratic minority) are really suffering severely financially, the income gap for families of color is even more horrific. The median wealth of white households is now almost twenty times that of black families, and eighteen times that of Hispanic households. 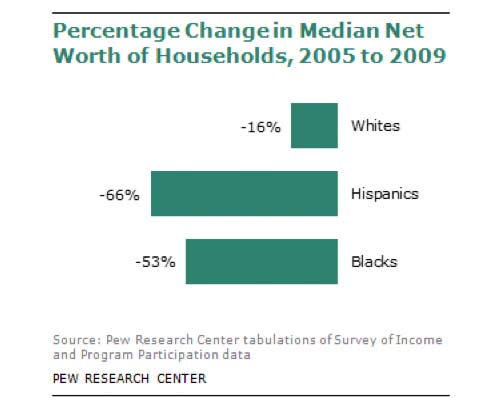 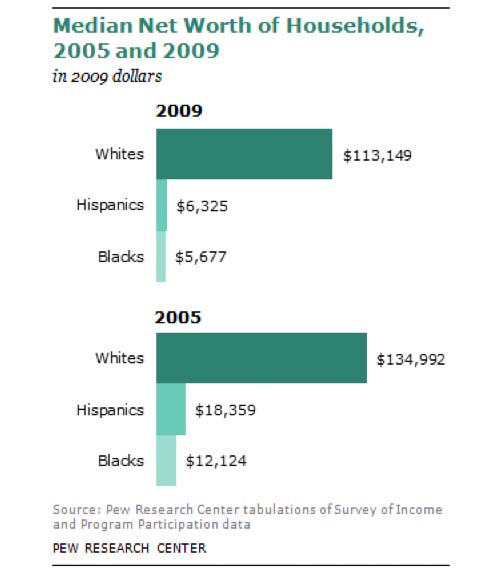 “These lopsided wealth ratios are the largest since the government began publishing such data a quarter century ago and roughly twice the size of the ratios that had prevailed between these three groups for the two decades prior to the Great Recession that ended in 2009.

The Pew Research analysis finds that, in percentage terms, the bursting of the housing market bubble in 2006 and the recession that followed from late 2007 to mid-2009 took a far greater toll on the wealth of minorities than whites. From 2005 to 2009, inflation-adjusted median wealth fell by 66% among Hispanic households and 53% among black households, compared with just 16% among white households.

Hispanics and blacks are the nation’s two largest minority groups, making up 16% and 12% of the U.S. population respectively.”

“You Can’t Own Property if You are Property.”

Images are via the Pew Research Center