“Cut Up Your Credit Cards and Free Yourselves”

Home » Blog » Economy » “Cut Up Your Credit Cards and Free Yourselves” 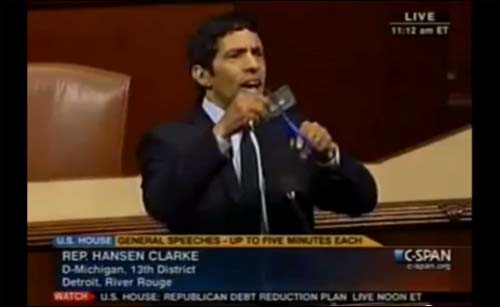 In the same liberating spirit of feminist bra-burners at the dawn of the women’s movement, a Democratic politician is now calling for some very grassroots direct action financial reform that any of us can do. Michigan Congressman Hansen Clarke recently cut up all of his credit cards on C-SPAN to bring home his point about confronting our own debt and dysfunctional spending habits. He had some very sensible advice for his fellow citizens:

So I’m going to ask every American right now, get out your credit cards, cut them up, free yourselves — free yourselves! Don’t count on this Congress to help you. This Congress already voted to end Medicare. They’re flirting with disaster on this debt right now.”

It sounds like Congressman Clarke and Reverend Billy have been hanging out together. It is so inspiring to hear one of our elected officials openly castigating over-consumption, as well as our nation’s diseased perspective on spending money that we do not have on stuff that we do not need. Congressman Clarke is also one of the visionary forces behind the growing movement to forgive all student debt; how amazing of an economic stimulus would that be?

It has been many years since I have had a credit card, and I am much happier to not have that debt. Living within our means is sometimes a bit of a challenge, but not really. In addition to moving your money into a local independent bank or credit union, cutting up your credit cards is probably one of the simplest things that you can do right now to start living a more sustainable life.