1. Plant Diversity: In every 2.47 acres of Amazonia, there are 1500 plant species, 750 tree species, and 900 tons of living plants. According to Rain Tree, 438,000 species of plants have been registered as having economic or social interest.

2. Animal Diversity: There are 300 non-lizard reptile species, 175 lizard species, 500 mammalian species, and 1/3 of the world’s birds in the Amazon Rainforest. There are also 30 million insect species.

3. Human Destruction: It is estimated that in rainforests around the world, 150 acres of rainforest are burned every minute and 130 animal, plant, and insect species are lost every day. The destruction is due to logging, slash-and-burn agricultural techniques, cattle ranches, mining, and subsistence agriculture among other things.

4. Oxygen: An entire 20% of Earth’s oxygen is derived from the Amazon Rainforest alone.

6. The Amazon River: Most of the Amazon River’s water is from the glacial melt in the Peruvian Andes.The river has 16% of all of the world’s river water and empties 28 billion gallons into the Atlantic everyminute. It has 1100 tributaries and its drainage basin is 2,722,000 square miles. 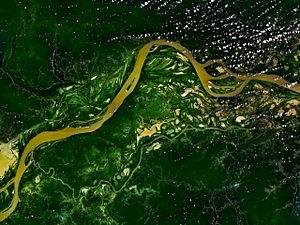 7. It’s Huge: The rainforest covers 1.2 billion acres and is 2.5 million square miles. It covers more thanhalf of Brazil and 2/5ths of South America. If the rainforest was a country, it would be the 9th largest inthe world and be larger than the continental United States.

8. Unique and Specialized Ecosystem: The plants and animals in the Amazon have evolved in such a waythat they create a tight-knit ecosystem. Each plant and animal relies on another greatly for its survival,which means that the Amazon Rainforest’s ecosystem is very delicate.

9. Temperature: The rainforest is very humid and has a larger temperature difference between day and night than between seasons. Its temperature is an average of 79˚F.

11. Forest Floor: The bottommost layer of the Amazon Rainforest. 2% of sunlight makes it to this layer which is filled with decomposing plants and tree roots. Large animals eat on this layer and decomposers are everywhere.

12. Understory: The layer of the rainforest that is second to the bottom. It receives 2-5% of sunlight and is packed with dense leaf cover.

13. Canopy: The layer that is second to the top. It has smooth, oval leaves that aren’t nearly as big as those in the understory, as these are closer to the sun.

14. Emergent Layer: The topmost layer of the Amazon Rainforest. It is made up of the tops of trees thatcan grow to be 200 feet tall. The leaves are very small at this level and are covered in wax so they canhold water.

15. Tribes: According to Rain Tree, there are approximately 200,000 natives living in Amazonia today. This is in stark contrast to the 10 million that are estimated to have lived there 500 years ago. 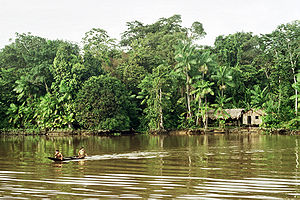 18. The World’s Pharmacy: About 25% of all drugs are derived from rainforest ingredients. However, it is estimated that scientists have only tested 1% of tropical plants for medicinal uses. Plant species are becoming extinct every day due to deforestation, and with them, our ability to cure new diseases.

19. Forest Energy: Out of all the energy that goes into the Amazon, 9/10ths of it are stored in tree leaves and tissues.

20. Amazonian Soil: 99% of the soil’s nutrients are in the topsoil. The forest floor is porous and traps nutrients easily. The roots of trees and plants keep the nutrient-rich topsoil fromwashing away.

21. Amazon River Floods: The rainforest floods from June to October, as the snowmelt from thePeruvian Andes makes the water in the Amazon River rise 30-45 ft.

It is amazing to think that these incredible facts are only a small portion of the wealth of information related the Amazon. Hopefully this list helps to inspire you to help save our rain forests in some way! Thanks to Jennifer Ledoux for help in compiling the facts. Interested in learning more about Rainforests? Please write your questions or comments below.