Murder is wrong. Killing people is morally reprehensible and barbaric. Future generations will look back on this time in the history of the United States, before the death penalty was abolished, as a very dark and ugly chapter of our country’s heritage. Thirty-four U.S. states still “legally” murder people. Yesterday, Texas even went so far as to execute a foreign national in defiance of the Vienna Convention, an international treaty to which we are allegedly a signatory. 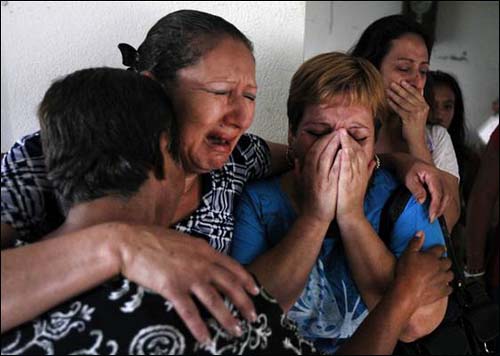 Just before the murder of the Death Row prisoner, this week the U.S. Supreme Court split on another contentious 5-4 decision, with the conservative majority voting to not delay the Texas execution of Mexican citizen Humberto Leal Garcia, even though he was never allowed any aid or consular access from his home nation, as is guaranteed by international law. President Barack Obama also weighed in against the execution; but unfortunately his serious concerns fell upon the deaf and oblivious ears of right wing extremist Texas Governor Rick Perry.

Texas represents ground zero for death penalty and prisoner civil rights abuses. The drought stricken region has killed more people than any other state in the country, including mentally ill and innocent prisoners. The Atlantic Wire details how egregiously the United States violated international law by killing Humberto Leal Garcia:

“U.N. High Commissioner for Human Rights Navi Pillay accused the United States of breaking international law when Texas executed Mexican citizen Humberto Leal Garcia Jr. Thursday night. The execution sparked controversy after the International Court of Justice in the Hague determined in 2004 that the U.S. had violated the Vienna Convention when officials failed to tell foreign inmates about their right to visit their consular officials. But the U.S. Supreme Court voted yesterday that Texas could go ahead with the execution, even over the objection of President Barack Obama. Pillay said today the execution ‘raises particular legal concerns’ about the fairness of the proceedings against Leal.”

The U.S. government filed legal briefs warning Texas that the execution would create an “irreparable breach of international law”, and Mexico’s government said that the killing would seriously jeopardize any future cross-border cooperation on joint ventures and extraditions.

The U.S. State Department explained that it was very concerned the case might also negatively impact the welfare of many U.S. citizens who run into legal problems overseas. They stated that over five million U.S. citizens currently live abroad, and millions more travel regularly outside of the country. 3,500 Americans were arrested overseas in 2010, and U.S. consular officials conducted almost 10,000 prison visits to assist U.S. citizens in countries all over the globe.

After this illegal atrocity in Texas, it is clear that our nation does not abide by its word, or the treaties that it signs. I certainly hope that in the future there are no U.S. citizens imprisoned anywhere abroad who are ever in need of help from their home country or international consulate.

“If the United States keeps giving the back of its hand to international norms, we are going to pay a price. We are already perceived in many parts of the world as a barbaric nation, because of our military incursions, our military posture.

Because of this death penalty issue, which resonates so strongly in other places, much more strongly than it does among ordinary Americans, and y’know people aren’t talking about it anymore, but all the problems that we had with torture and with detainees and that sort of thing, and I think that it has taken a toll, and it’s going to continue to take a toll. We really need to be paying more attention to the way the rest of the world perceives us.”

image is via Reuters