Is this what is meant by the free market regulating itself? When I first saw this photograph it really sickened me, and it has been gnawing away at me ever since. I can not stop imagining being an impoverished, illiterate eight year old miner, crawling each day into small cramped dark tunnels, clawing bits of toxic coal out of the hard ground with my bare and bloody hands, my filthy skin blackened by coal dust and caked soot. 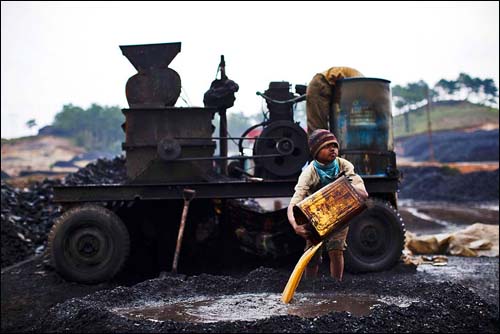 This gut-wrenching image is of a young boy who works in one of India’s many coal mines near Ladrymbai, in the Jaintia Hills district in northeast India. In the Los Angeles Times Mark Magnier reported grim and disturbing details about the horrific child labor situation in the country’s coal mines:

“The young miners descend on rickety ladders made of branches into the makeshift coal mines dotting the Jaintia Hills in northeast India, scrambling sideways into ‘rat hole’ shafts so small that even kneeling becomes impossible. Lying horizontally, they hack away with picks and their bare hands: Human labor here is far cheaper than machines.

Many wear flip-flops and shorts, their faces and lungs blackened by coal. None have helmets. Two hours of grinding work fills a cart half the size of a coffin that they drag back, crouching, to the mouth where a clerk credits their work. Most earn a dollar or two an hour…some of the labor is forced, and an Indian NGO group, Impulse, estimates that 5,000 privately-owned coal mines in Jaintia Hills employed some 70,000 child miners.”