Every movement needs an anthem. Whether it is to save a river or end a war, a well written song can clearly communicate the message and rally public support more effectively than hours of speeches and protests. Now the organized effort to end the toxic mining process of hydraulic fracturing has its own song, thanks to the musician Marc Black.

“No Fracking Way” uses humor to tell the story of corrupt predatory gas companies attempting to poison our water and world. Many people have no idea what fracking is, or that Cheney managed to exempt the entire dangerous process from the Clean Water Act with what is known as the “Halliburton Loophole”. Hydraulic fracturing has the potential to contaminate all of the drinking water on our planet, and even set it on fire.

You can hear Black’s fracking song on his website: marcblack.com 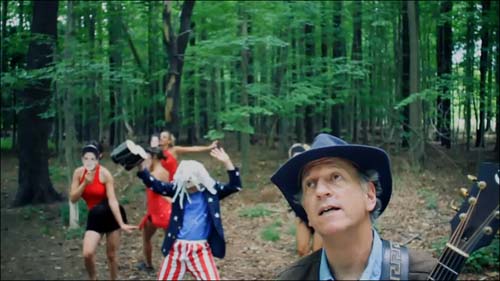 Black is in the process of raising the money needed to create a video for his protest anthem, “No Fracking Way“, and plans to have children act out the lyrics. He explains a bit about writing the song, as well as his project to make an educational hydraulic fracturing video:

“I wrote ‘No Fracking Way’, and recorded it with John Sebastian, Eric Weissberg, and more than a hundred Woodstock, NY citizens singing along on the final choruses. That’s all been cool and I’ve been asked to sing it all over the place…from fancy schmancy events in New York City, to living rooms in Sullivan County.  And the song has been played at rallies from Ireland…all the way to Australia.

But this is a visual society. The only way I know to rally lots of folks fast and free us from this fracking nightmare is with a video. That’s why we want to make it…to give it away! Give it away on youtube. Free! Make it available as a download. Free!

We recorded the song on our dime, but we just can’t afford to pay for the video. We need your pledge.

Bottom line…without good drinking water, there is no life as we know it. And I’d miss it, wouldn’t you?”

I Love You Rachel Maddow

Lately I have been utterly entranced with the video for another one of Marc Black’s great songs, and ode to one of my favorite people, Dr. Rachel Maddow. I had first heard “I Love You Rachel Maddow” awhile ago, and really liked the catchy tune, but the visual dreamscape created by the surreal images in the song’s video makes the music even better. It is stunning to look at, and was directed by Blake Farber. 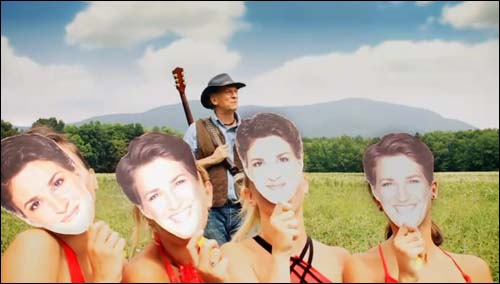 Farber’s short was filmed in the lush forests and meadows of Woodstock, New York, and is really beautiful. The video is filled with dancing wood nymphs with Maddow masks and a crazed drunk hippie Uncle Sam bird man character, who is vaguely threatening and crawls around on his hands and knees while Black sings. At one point the weird Uncle Sam reggae bird man gives what appears to be a Nazi salute, and then wanders off. The whole thing reminds me of a lovely hallucinatory acid flashback.

As Black professes his genuine devotion to the brilliant and beloved Dr. Maddow, he enthusiastically sings:

cuz you bring delicious freedom to my head

cuz you’re shaking up the blue, white and red…”

I love this inspiring clip, and have been listening to it all week. I can’t wait to see what Black and his friends come up with for their educational “No Fracking Way” video. We need more delicious freedom. Click here to help support the project to get this important film about hydraulic fracturing made.

If you would like to see Marc Black perform his music in person, here are a few of his upcoming appearance dates:

All images are from “I Love You Rachel Maddow“