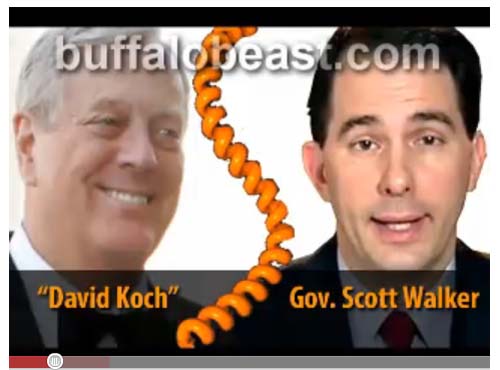 The divisive governor of the state of Wisconsin, Scott Walker, has inadvertently revealed his true motivations behind trying to kill the collective bargaining rights of some of the state’s unions. He thought was talking on the phone to right wing zillionaire David H. Koch, but the clueless governor was actually speaking to a New York blogger from the Buffalo Beast.

During the recorded conversation Walker joked about bringing a baseball bat to a meeting with Democratic leaders, and said that it would “be outstanding” to be flown out to California by Koch for a good time after the battle is over. Walker also proclaimed athat he expected the anti-union movement to spread across the country. The phone call has already become a viral hit online.

You can hear a recording of the entire conversation at the Daily Kos. In related news, Rachel Maddow has also offered some very  revealing background and insight into Walker’s past failed attempts to destroy the rights of unionized security guard workers.

image is via the Daily Kos