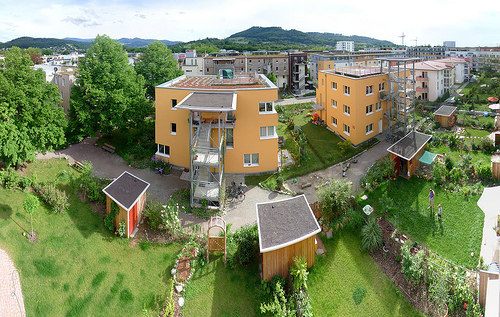 The Vauban district is a green, planned community in the city of Freiburg in southern Germany. Construction of this community began in the mid-1990s and opened in 2000. By 2001, it had 2,000 inhabitants living in a greener, more sustainable way. Now, the Vauban district is said to have 5,000 inhabitants and 600 jobs. A recently article I ran across highlights the green features of this community and I thought I’d share some of that here. 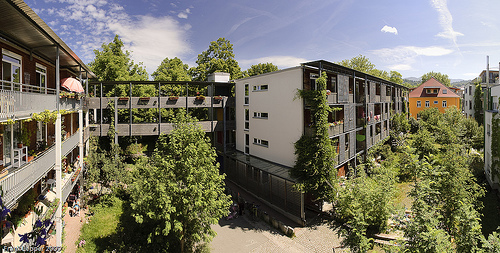 “The Vauban district was created through cooperative decision-making, becoming a model of holistic environmental planning and eco-friendly living,” Louise Abellard of The Cereplast Blog writes.

The Vauban district was planned around green transportation. While the district includes some local streets and is surrounded by a couple collector streets, cars hardly ever go through the community. There is no car parking within the community. For residents who own cars, they can park those in a community parking lot on the edge of the district, which is not subsidized by the car-free households like it would be anywhere else. Vauban is reportedly the “biggest car-free project” in Germany. 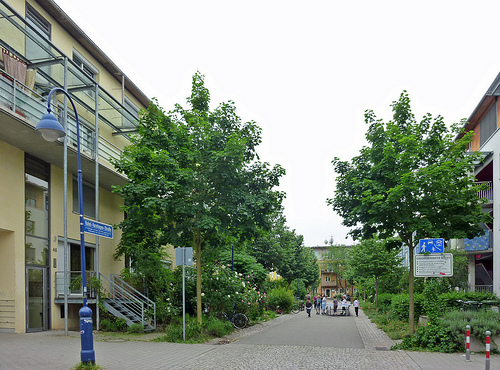 “When moving into Vauban, 57% of the households that previously owned a car decided to let their car go. All in all, 70% of the inhabitants live without a car in Vauban,” Abellard reports.

The main mode of transportation for most trips and activities according to two studies on the matter.

The community also focused a ton on best practices in green building and energy technologies and usage:

Special attention has been brought to minimizing buildings’ carbon dioxide emissions. Locally-produced and sustainable materials were given priority during sustainable housing construction; roofs are commonly equipped with solar and photovoltaic panels, and make Vauban one of the largest home solar energydistricts in Europe. To encourage carbon reduction, a program supports tree conversation and planting. As far as water is concerned, a system for rainwater infiltration into the ground covers 80% of the residential area. A new ecological sewage system has been invented too, that reuses organic household waste and generates energy.

All buildings have to meet minimum low energy consumption standards of 65 kWh/m2a  (i.e., at least half the average German energy standards). Public energy and heat are generated by a highly efficient power station operating on wood chips, which is connected to the district’s heating grid. 42 building units are “passive” energetically speaking: a passive solar house consumes 15 kWh/m2a or less. Heat is produced by the house itself equipped with solar roofs and heat recovery systems. Still better: 100 houses follow a “plus-energy” standard, which means they actually produce more energy than they use. Energy surpluses are then sold back to the city grid, and profits are split between each household. 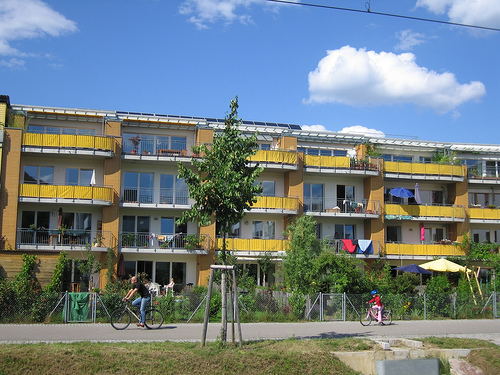 Beyond these logistical and environmental issues, the community has put a lot of emphasis on social interaction, enhancing that through design, and cooperative decision-making.

For more on the Vauban district, check out Louise Abellard’s post, its Wikipedia page, a noncommercial website on the district, or the blog of a resident, which includes information about guided tours.