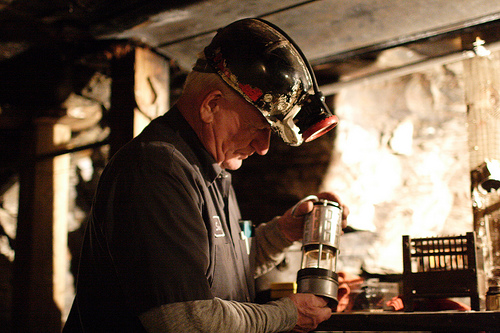 West Virginia coal miners have always taken pride in supplying energy to the world. Although their work hours are long and the hazards of the job are many. They reluctantly dig coal to support their families, because there are no other opportunities for these hard working individuals. In a state that is politically controlled by the coal industry, politicians are bought and paid for every election. The campaign funds provided insure that clean energy will not find its way into the heart of coal country. This type of control by the coal industry in West Virginia has been going on for over 100 years. Politicians in West Virginia have fought for mountaintop removal, sued the EPA, and they have even gone as far as shooting a bullet through a mock cap and trade bill (that was already dead). They have done this just to protect the interest of the coal industry and their campaign funding.

But that is about to change. Now, thanks to a group called “The Job Project,” coal miners are getting the opportunity to provide others with clean, renewable energy.  The group is devoting themselves to creating renewable energy jobs in Central Appalachia, were coal dominates, from West Virginia to Kentucky. The group has just recently secured a first for the West Virginia southern coalfields, a rooftop solar array, which is being assembled by unemployed and underemployed coal miners and contractors. The rooftop array is being placed on a doctor’s office in Williamson, WV. The fact that it is located in the heart of coal country signifies, to an area that has been reliant on mining for years, that there can be life beyond coal.

The spokesman for the group, Nick Getzen, said, “This is the first sign for a lot of folks that this is real, and that it’s real technology, and they can have it in their communities.” The group has teamed up with a solar energy company from the Eastern Panhandle, Mountain View Solar & Wind of Berkeley Springs, to develop a privately funded job-training program. The 12 trainee miners are earning $45 an hour for three days of work, which is a lot more than they earned working in the mines. After the installation, the trainees will be doing assessments on seven other properties. The solar company is also giving the miners the opportunity to branch out on their own and create their own sales leads and close those sales.  As they’ve stated, they are “not worried about creating competitors because there’s plenty of work to go around. Mountain View Solar & Wind has tripled in size two years in a row and is likely to do the same in 2011. This is a positive sign for West Virginia, which has been reluctant to accept renewable energy. As someone once said, “Small steps turn into big steps.” West Virginia coal miners have always bragged about “keeping the lights on.” Now, they can do it without hurting the environment.