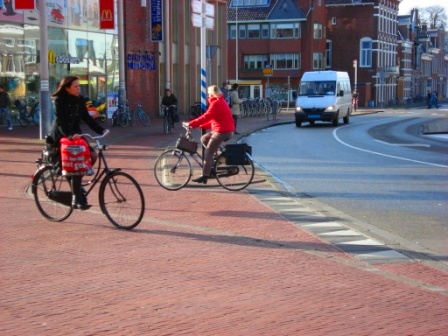 Europe, as we know, has a much different urban fabric — because most of its cities were developed long before cars arrived. They have narrower streets, are more walkable, more bike-friendly, and more pleasant. Nonetheless, Europe went the same route as the U.S. in recent years with the boom of the automobile and started trying to accommodate it more. In the end, I would argue, some cities started to ruin their high quality of life and efficiency.

Now, however, a number of European cities are taking a U-turn and discouraging use of cars by cutting and pricing parking.

As I always say, a city, by definition, is a lot of people living in a relatively small area. If you try to move each individual in those areas in a large vehicle of their own, you are going to run into big problems and inefficiencies. Also, if you’ve ever stood next to or sat in a 12-lane highway, you know that they are downright ugly, depressing, and frustrating.

Here’s the intro to a good piece, Europe Takes a U-turn on Parking, on the New Urban Network about a new in-depth report, Europe’s Parking U-Turn: From Accommodation to Regulation, on the parking revolution occurring in some European cities:

Every American has seen photographs showing ancient European squares crammed with parked cars. The lesson those pictures impart is that even in Europe, the car must be accommodated.

But a fascinating new report from the Institute for Transportation & Development Policy (ITDP) explodes that notion. Europe’s Parking U-Turn: From Accommodation to Regulation, authored by Michael Kodransky and Gabrielle Hermann, argues persuasively that a number of European cities are leading the world in a different direction — toward limiting the availability of parking and toward making spaces for automobiles more expensive. Public space is being reclaimed for pedestrians.

“Parking management is a critical and often overlooked tool for achieving a variety of social goals,” declares the report, which follows a report last spring on successful parking practices in US cities.