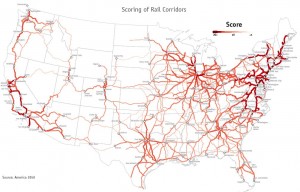 What are the most promising high-speed rail routes in the nation? A new report released by America 2050 evaluated 7,870 potential high-speed rail corridors across the country

Here’s more on the report from the INFRASTRUCTURIST:

To evaluate each corridor, the authors created a scoring system that weighed 12 factors that contribute to rail ridership, including population, employment concentration, existing transit systems, air travel markets, and highway congestion. They then assigned each high-speed line a point value ranging from 0 to 21.15.

The scores are relative; there’s no particular number that indicates whether or not a line should be built. But a score of 19 or higher means that the corridor ranked in the top percentile of all potential lines for most of the chosen criteria. Corridors that scored above 17 fell in the top 10 percent of most criteria, while lines that scored below 10 fell in the lower 50 percent of the same.

No surprise that lines in the Northeast region scored highly. Seven potential corridors there scored over 19 — including the Washington to New York route, which received a perfect 20.15 — and eleven scored over 17. We won’t see a Chicago to Milwaukee line while Scott Walker is the governor of Wisconsin, but the authors felt it had great potential, granting it a score of 19.38. A Los Angeles to San Francisco line also seems promising, especially for a long corridor, scoring 17.98 — though shorter lines from L.A. to San Diego, Riverside, and Santa Barbara all received higher individual scores.

Here are a bunch of corridor scores according to region (length presented in miles): 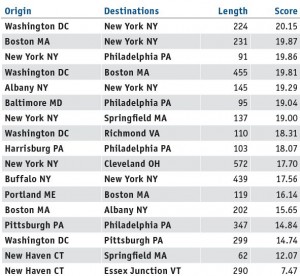 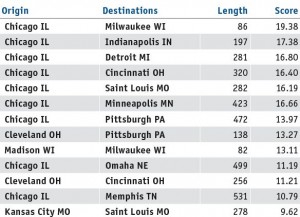 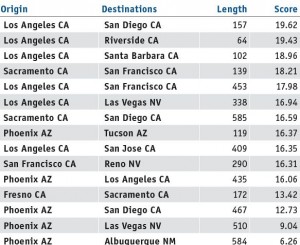 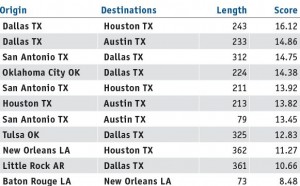 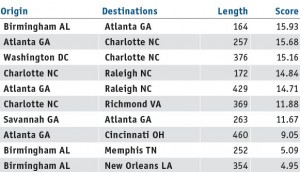