Why Republicans Try to Kill Public Transport (Despite its Economic Benefits)

Republicans, many of them, would have public transportation funding cut despite the clear economic, financial (for citizens), quality of life, and environmental benefits. Why? Yonah Freemark of the Transport Politic finds some answers and shares them in Understanding the Republican Party’s Reluctance to Invest in Transit Infrastructure. Here’s a key piece of that article:

As shown in the chart above (in Log scale), there was a relatively strong positive correlation between density of congressional districts and the vote share of the Democratic candidate in the 2010 elections. Of densest quartile of districts with a race between a Democrat and a Republican — 105 of them, with a density of 1,935 people per square miles or more — the Democratic candidate won 89. Of the quartile of districts with the lowest densities — 98 people per square mile and below — Democratic candidates only won 23 races. As the chart below demonstrates (in regular scale), this pattern is most obvious in the nation’s big cities, where Democratic Party vote shares are huge when densities are very high. 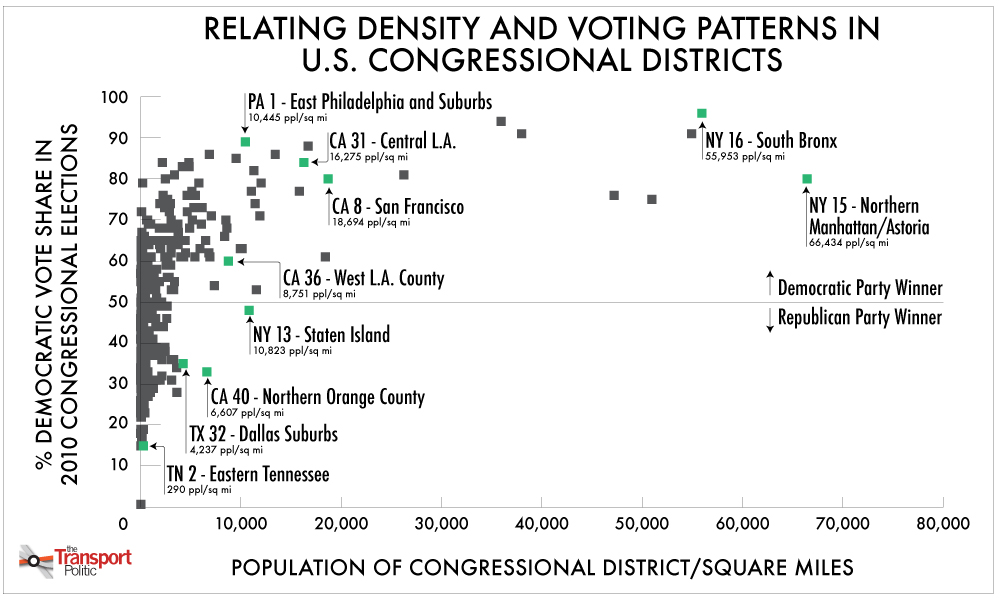 This pattern is not a coincidence. The Democratic Party holds most of its power in the nation’s cities, whereas the GOP retains greater strength in the exurbs and rural areas. The two parties generally fight it out over the suburbs. In essence, the base of the two parties is becoming increasingly split in spatial terms: The Democrats’ most vocal constituents live in cities, whereas the Republicans’ power brokers would never agree to what some frame as a nightmare of tenements and light rail.