Bike Theft and Vandalism Not an Issue For U.S. Bike-Sharing Programs 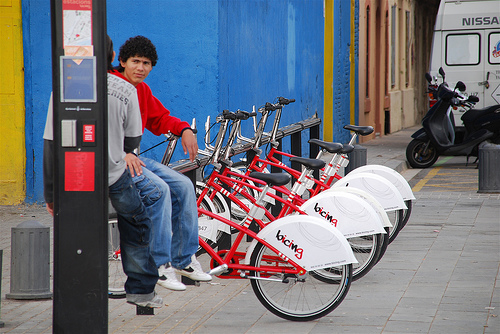 For example, Barcelona’s Bicing system, run by ClearChannel, has had about one-fifth the rate of stolen public bikes as Vélib, despite higher theft rates citywide, according to the New York Department of City Planning.

Stateside, the problems with crime have been smaller still.

“Theft and vandalism hasn’t been a big problem with either of our two systems,” said Jim Sebastian, who runs Washington D.C.’s bike and pedestrian programs. Under D.C.’s old SmartBike system, which opened in 2008, only one bike was ever stolen, and that was when a rider left it unsecured. Under the new and larger Capital Bikeshare system, which launched in September with about 1,100 bikes, they’ve lost fewer than five bikes, Sebastian said.

Bike-sharing programs in Minneapolis and Denver also haven’t had a problem with these issues. The solution they found? Better locking systems.

“Just making it difficult to get the bikes out of the rack,” is the key, Jim Sebastian, who runs Washington D.C.’s bike and pedestrian programs, said.

We’ll see if this holds true in New York when the city launches what could be the biggest bike-sharing program in the world, a system that might be a little bigger than Paris’ Vélib system but that would dwarf other U.S. bike-sharing systems.