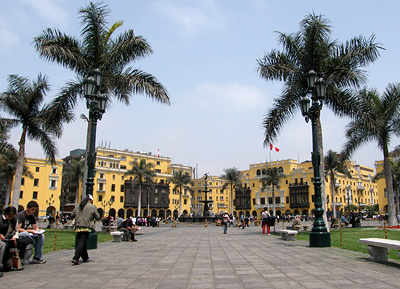 Lima, the capital of Peru, is home to 8.4 million people in the metropolitan area, making it the third most populous city in the study. It is also the second poorest city in the Index, with a GDP of US$4,900 per capita. Lima has an overall rank of well below average. Many small businesses are operating informally, which hampers the efforts to enforce environmental standards. The city’s best performances are in the areas of energy and CO2 and transport. With buses running on 100 percent natural gas, the city achieves an annual reduction of CO2 emissions of 185,000 metric tons.

Believe it or not, Latin America is the most urbanized area of the world according to the United Nations. 81% of the population lives in urban areas. (Globally, a little more than 50% of the population lives in urban areas.) With 80% of global greenhouse gas emissions coming from cities, it is critical that we learn more about how to improve their environmental practices and effects of cities in order to minimize the effects of global warming, and this Index is a good step forward. 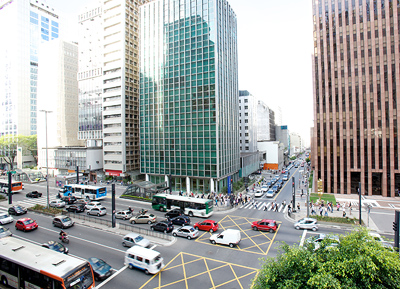 With 11 million people living inside the city limits, São Paulo is the most populous city in the Index. At US$15,100, it also has the fifth highest GDP per capita in the Index. Over the past century, the city experienced a rapid and often chaotic urbanization. Despite the challenges arising from this development, São Paulo earns an above average overall result. The city’s strongest performance is in the energy and CO2 category. With a comprehensive climate change policy, the city has made a commitment to reduce greenhouse gas emissions by 30 percent of its 2005 levels by 2012.

The Index delves into both best practices and critical problems that need to be addressed in these 17 cities. It covers a range of critical environmental issues.

Residents’ environmental perceptions, unsurprisingly, tend to focus on issues that are highly problematic and visible, such as traffic congestion, uncollected waste, or polluted air or rivers. The Index, on the other hand, measures environmental performance across eight categories — energy and CO2, land use and buildings, transport, waste, water, sanitation, air quality and environmental governance — and gives equal weighting to each. The Index also evaluates policies, which are a reflection of cities’ commitment to reducing their future environmental impact.

“The Latin American Green City Index will help the cities to learn more from each other, and forms an objective basis for an exchange of ideas on successful strategies,” says Peter Löscher, President and CEO of Siemens.

The 17 cities studied were reportedly picked based on available data, size, and economic and political importance. 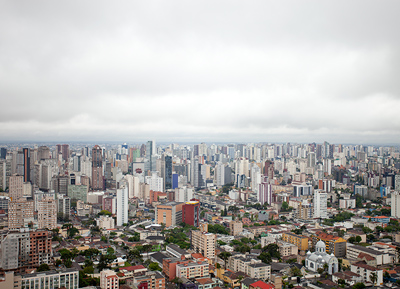 Curitiba is the fourth largest economy in Brazil. The city proper has a population of 1.9 million. At US$10,800, it has the eighth highest GDP per capita in the Index. Over the years, it has won international recognition for its efforts in sustainable development. Curitiba is the only city in the Index that has an overall rank of well above average; it is the greenest city in the Index. Curitiba’s impressive performance is largely attributable to its well-developed policies in areas such as waste management and clean air.

Curitiba, which I wrote about just the other day, came out as the leading green city in Latin America. The City Fix, where I found out about this Index, reports:

Even though Curitiba was the birthplace of BRT and the home of Brazil’s first pedestrian-only street, the city achieved its ranking as the top city for air quality and waste. According to the report, “Since 2009, for example, the city’s environmental authority has been conducting an ongoing study on the CO2 absorption rate in Curitiba’s green spaces, as well as evaluating total CO2 emissions in the city.”  The city has also been working to move people from informal settlements and slums to low-income housing where sanitation infrastructure like water and waste collection are easier to supply. Curitiba also achieves such distinction for its holistic approach to the environment. As early as the 1960s, “city officials implemented proposals to reduce urban sprawl, create pedestrian areas, and provide effective, low-cost rapid transit.” 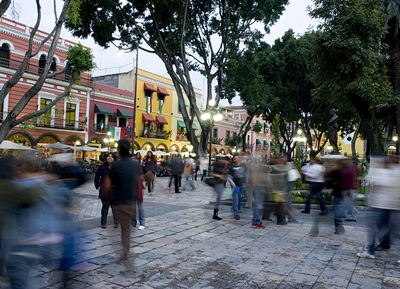 Located in south-central Mexico, Puebla is the country’s fourth most-populous metropolitan area, with 2.6 million residents. Although its per capita GDP is the sixth-lowest in the Index – only an estimated US$6,500 – the city has an average Index ranking. This ranking is supported by a strong performance in the waste category, due to high levels of waste collection and low levels of waste production. To further reduce waste, Puebla has introduced incentives and rewards to actively encourage recycling and re-use.

Interestingly, counter to what similar studies in Asia and Europe have found, this study found no correlation between city income and environmental performance. 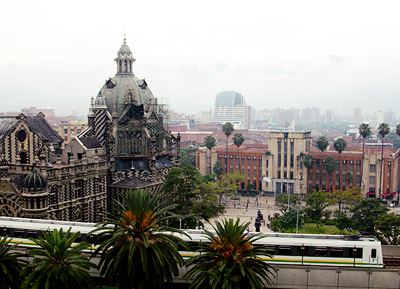 Medellín is one of Colombia’s major economic and political centers. Its greater metropolitan area has a population of 3.5 million and an average per capita GDP of US$5,500. Overall, Medellín has an average Index ranking. The city scores highest in the sanitation category, due to high rates of sanitation access and wastewater treatment as well as consistently strong sanitation policies. To improve air quality, Medellín has initiated a program to restrict vehicle use in the city during peak periods two days a week.

While some cities (i.e. Curitiba and Santiago) are sustainable transportation leaders, cars are clearly still major problem in the region:

Of transit more generally, the report highlights the fact that many Latin American cities have successfully set up extensive public transit systems, however, they have not necessarily gotten the people who can afford and choose to drive out of their cars, calling the region deeply entrenched in the culture of individual transportation.  Plus, policies to encourage the use of public transit are rare, save for Santiago. Only two cities have park-and-ride schemes, none have carpool lanes. The number of vehicles per capita increases with per capita income, regardless of the extent and breadth of the public transit network. 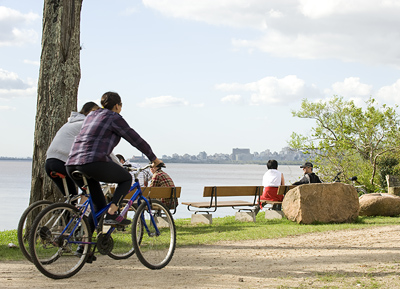 Porto Alegre is located in Brazil’s southernmost state and is home to 1.4 million people. Located at the confluence of five rivers, it has a major port that serves as a transport hub for all of southern Brazil, thus contributing significantly to the local economy. In the Index, Porto Alegre ranks average overall. Its best performance is in the waste category. And according to official figures, it is one of just a few in the Index that has achieved universal access to potable water and sanitation services.

As you can imagine, this report is expected to be widely viewed and quite important. The City Fix writes: “EIU is a prominent research and intelligence firm that delivers business and intelligence to more than 1.5 million decision-makers from global companies, financial institutions, governments and universities. This new report is likely to be highly influential. ” 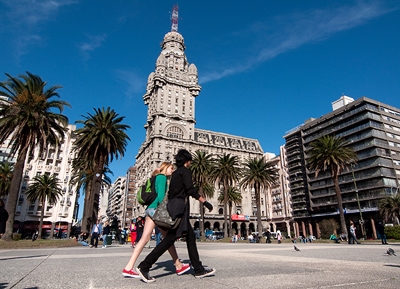 Montevideo, with a population of two million in its metropolitan area, is the capital of Uruguay and the country’s economic and financial center. Its metropolitan area generates a GDP of US$6,400 per capita. Montevideo is ranked below average overall. However, it generates one of the smaller amounts of waste among the cities in the Index, at 303 kg per person per year across the metropolitan area, much lower than the average of 465 kg. Its best result is for environmental governance. The main reason for this is that the city monitors its environmental performance and publishes its results.

The final rankings of the cities is as follows:

Photos (including captions) via Siemens