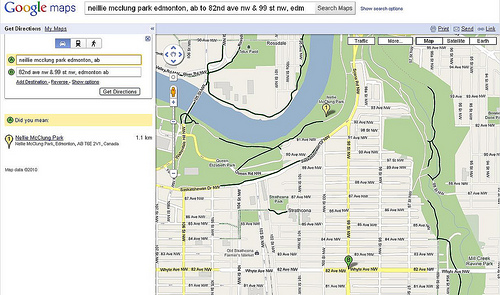 Cycling directions became an option in Google Maps in 150 U.S. cities back in March. News is that they are now about to be an option in Canada as well.

9 major Canadian cities (Calgary, Edmonton, Gatineau, Kelowna, Ottawa, Toronto, Vancouver, Waterloo and Winnipeg) shared bike path and bike lane data with Google and users in those cities will be able to see such infrastructure options in their directions. In other Canadian cities, users will be directed to low-traffic roads. Cyclists will also have the option to avoid steep hills and find shortcuts via the Google Maps directions.

Google, of course, loves free labor and wants to improve its services, so it is asking that people use its reporting tool to report any errors or suggest good bike routes.

Good news for Canadian residents and visiting cyclists. Hopefully this feature will encourage more people to use green transport as well. If you’re in Canada (or anywhere), get on a bike today!

This post is a quickie, a way for us to share more news with you by quickly covering good stories on other sites.