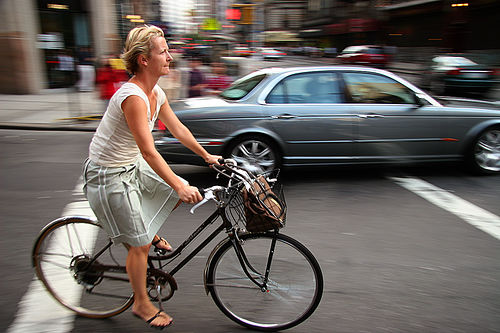 According to NYCDOT’s press release, the program would be an “[e]conomically self-sustaining system of publicly available bicycles sought to provide environmental, congestion-reducing transportation option for New Yorkers [and] visitors.”

Not a lot of details are in the announcement, but the it did mention the following:

[the private company would] bear all the cost and responsibilities for the system during an initial five-year period while sharing revenues with the city, and with no taxpayer funds being used for the system’s implementation, upkeep or maintenance.

The RFP calls for a system that includes bike share stations that would be located every few blocks, allowing for easy pick-up and drop-off. The system will allow members of the public to purchase memberships, which would entitle them to an unlimited number of 30 minute trips each day at no additional cost. Trips longer than 30 minutes would likely be assessed a small charge, as bike share is meant to serve short trips.

While the announcement does not indicate the number of bicycles or scale of the system, the city previously mentioned that it wants to have a system even larger than Paris’.

NYC is an ideal city for bicycling in many respects and it’s about time it implements such a system. I think it can truly make it one that the world can admire.

“Biking has become a serious transportation option in New York and bike share is the clear next step,” said Commissioner Sadik-Khan. “New York’s ideal geography, high residential and commercial density and growing bike infrastructure make it the perfect option for short trips since over 50% of trips in NYC are under two miles.”

Looks like NYC is serious about moving forward with this bicycle sharing program. Hopefully it will be as big and effective as the city initially announced it would like it to be.