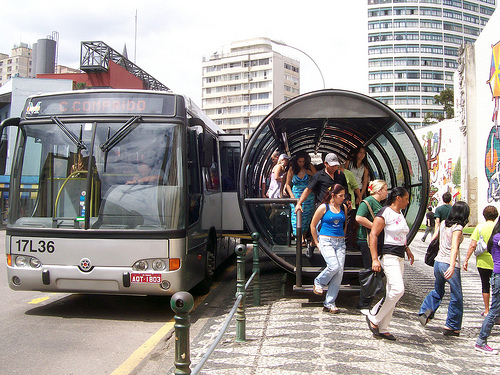 Curitiba, Brazil has improved itself as much as practically any city on the planet in recent years. A new short video on the city was released by EMBARQ last week and a screening of the video was held at the World Resources Institute in Washington, D.C.

The City Fix, in a post covering this screening, the video, and Curitiba’s special successes and lessons, writes:

Cities grow in chaotic ways. Zimmerman noted the sprawling trend of U.S. cities moving outward in a sprawling fashion with the most peripheral area of development usually being more desirable than the development preceding it. This sort of process encourages sprawl and newness rather than making existence development more livable.  Curitiba, in contrast, is a well-designed city with economic activity and real estate value focused in the center of the city along [Bus Rapid Transit (BRT)] corridors because of its integrated transportation and land use planning. By bringing these two elements together, BRT became successful (ridership in Curitiba is 70 percent) and the growth of the city and expansion of BRT occurred in conjunction with walkable neighborhoods and high-value development. Zimmerman reiterated that transportation is important because it moves people, but it must also be organized around greenspace and pedestrian areas with multiple uses, high density and high volume.

Curitiba’s successes could teach the U.S. a lot. Unfortunately, we have tried to implement some of them (i.e. BRT) in a watered down form. Of course, the results end up being different, much less effective. Like our water-downed imitations of the highly-successful Paris bike-sharing program, the U.S. needs to realize that if it is going to do sustainable development, it needs to do it right. It’s not just a side dish.

For more on Curitiba and lessons the U.S. and other countries around the world could learn from it, check out The City Fix’s piece: City’s in Focus: Curitiba