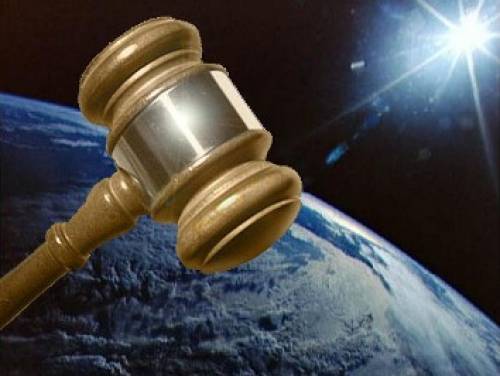 Citizens gathered in downtown Salt Lake City Saturday to hold their very own climate trial-with or without the courts. On trial were Tim DeChristopher, the U.S. government, citizens, and the “accidental bastard children of the 14th Amendment,” i.e., corporations.

Organized by Peaceful Uprising, the Climate Trial was prompted by the case of DeChristopher, who is being charged with disrupting a Bureau of Land Management land auction for oil and gas drilling in December 2008 and whose trial has been delayed many times. He and his supporters decided that rather than wait for the courts, they would hold a public trial — part art, part activism — to determine who the real criminals are.

During the trial, DeChristopher described the moment when he decided to take action as the public lands were being sold off to the highest bidder, “I could no longer resist the moral imperative of interrupting the crime that was in progress.”  That’s when he took paddle #70 and won several leases worth a total of $1.8 million dollars, without the intent or ability to pay.

He defended his actions by saying, “As a citizen with the authority and responsibility to hold my government accountable, my actions were justified in the face of a criminally negligent United States government.”

The citizen jury agreed and found DeCristopher not guilty.

The court’s other findings:

The U.S. government was found guilty of negligence and failing to protect its people and was sentenced to be a democracy, subservient to the will of its citizens.

Corporations were found guilty of paying off representatives and coercing the government and sentenced to return to the role it played in the first 100 years in our history, as institutions without the rights of human beings and required to serve the public good.

Also receiving an indictment: citizens who have become mere consumers. A democracy requires an active, educated citizenship and one without it ceases to exist. The jury concluded that the character of social change is determined by the action or inaction of citizens. Citizens were sentenced to holding their government and corporations accountable to the interests of the people and determining their own fate and the fate of future generations.

Here are highlights from the action:

Here is the full video of this beautiful piece of art and activism.