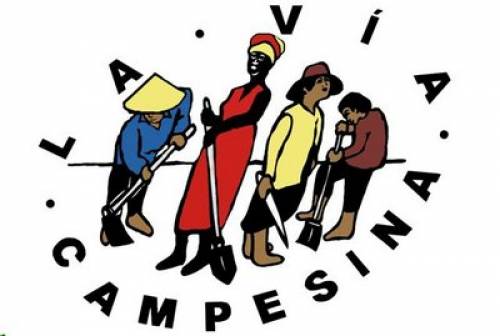 The battle between People and the Market in the struggle for climate, environmental, and social justice continues. The next round of negotiations under the UN Framework Convention on Climate Change (COP16) is coming up in Cancun, Mexico from November 29 to December 10.  Meanwhile, a series of caravans consisting of indigenous people, farmers, and social movements will be traveling from all around Mexico en route to Cancun, where they will host an Alternative Global Forum for Life and Environmental and Social Justice from December 5-8.

En route they will highlight local environmental and social justice issues, such as community displacement because of industrial mega-projects, water pollution and water resource control, contamination from mining and industrial agriculture, and toxic waste sites.  The caravans are being organized by the National Assembly of People Affected by the Environment and the international peasant movement La Via Campesina as well as by diverse social movements from the United States, Canada and Mexico.

For a little context, after the (farce or tragedy) of last year’s climate summit in Copenhagen, it was determined that a process outside the United Nations framework was needed. Bolivia’s president, Evo Morales, called for the World People’s Conference on Climate Change and the Rights of Mother Earth soon after the UN Climate Conference last December, when it became clear that a binding treaty with strong action was not forthcoming.

Out of that process in April came the People’s Agreement, also called the Cochabamba Accord.  The Agreement calls for deep emission reductions on the part of countries in the Global North and significant climate financing for the Global South, it rejects carbon offsets and trading, and calls for indigenous self-determination, economic justice, migrant justice, gender justice, environmental and climate justice, and food sovereignty.

Now the spirit of Cochabamba is being brought to Cancun. In addition to the caravans, the proposals from the People’s Agreement will be brought to Cancun, some of which are now included in the new negotiating text agreed upon in October during the latest round in Tianjin, China. Several alternative People’s Assemblies will be also be hosted apart from the official UN Cancun negotiations.

Via Campesina is also calling for “thousands of Cancuns” to be held on the December 7 Global Day of Action in order to add strength and visibility to the mobilizations that will be taking place in Mexico.

Here is the full announcement from Via Campesina:

Over a thousand women and men, farmers, indigenous people, urban and rural people affected by social and environmental destruction are planning to march in 5 caravans towards Cancun, Mexico, in protest against the indolence of the dominant countries and capitalists of the world gathering for the conference of the UN Framework Convention on Climate Change from November 29 to December 10, 2010.

The caravans co-organised by the National Assembly of People Affected by the Environment and the international peasant’s movement La Via Campesina and by a convergence of diverse social movements from the United States, Canada and Mexico will kick off in San Luis Potosi, Guadalajara, and Acapulco, joining other rural, urban and student movements in Mexico City on November 30 for a mass protest for environmental and social justice . Two other caravans will then depart from Oaxaca and Chiapas, all converging to Cancun on December 3 for the inauguration of the Farmers’ and Indigenous Camp organized by La Via Campesina.

The caravans’ journeys will bring local struggles against social and environmental injustices into the limelight as the global community convenes for the climate negotiations in Cancun. They will denounce the widespread apathy in the face of the current socio-environmental scandals, as well as the Mexican government’s maneuvering to implement mega-projects for “Clean Development Mechanisms (MDL)” which in fact devastate communities and the environment. This is the case of the large industrial pig farms such as Smithfield, the production of agrofuels for airplanes, the  ”semi- remediation” of open air garbage dumps, large hydro-dams and new GMO extensions.

In solidarity with this movement against corporate greed in the name of “climate change”, Via Campesina farmers from around the world and other activists will join the caravans. According to Henry Saragih, general coordinator of La Via Campesina, “leaders from Asia will also march with the affected people of Mexico and North America. In my country Indonesia, people also lead hundreds even thousands of struggles, at local level, against commercial projects destroying people livelihoods and the environment”.

Josie Riffaud, a Via Campesina farmer leader from France also insisted that “the solutions being discussed in the climate talks are very scary. We are being told that some projects will help solve the current climate chaos, but it is an illusion. We are seeing an increase of monoculture plantations, genetic engeneering, agrofuels plantations, landgrabbing, all of this will further increase devastation and exclusion”.

In Cancun, La Via Campesina and its allies will organise an “Alternative Global Forum for Life and Environmental and Social Justice”, on December 5 through 8, and a mass mobilisation of peasants, indigenous and social movements on December 7. At the same time, in Cancun and around the world, thousands of people and organisation will mobilise creating “thousands of Cancuns” to denounce the false solutions against climate change and to promote a real system change.