Pentagon Takes Sun Power to the Next Level: Solar Nukes and Landmines 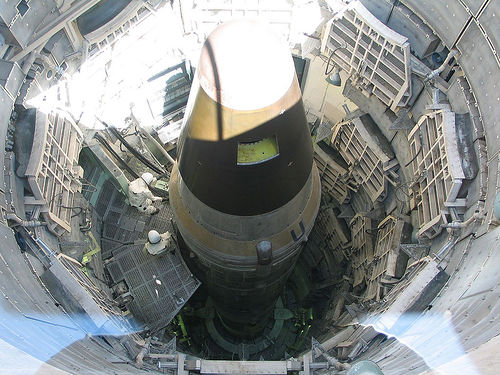 The Pentagon is taking its use of solar technology to the next level, a military spokesperson announced on Wednesday.

“Starting February 2011, up to twenty U.S. nuclear weapons and facilities will be operational using mostly the sun as their source of power.” Admiral Charles Bollinger said. Both the facilities and the weapons themselves will be powered mostly by solar power. Bollinger is a ranking officer with over two decades of service and was appointed the Pentagon’s Chief Sustainable Technology Officer under President Bush.

The move is part of the Pentagon’s on-going efforts to be a leader in cutting-edge green technology while reducing their energy consumption. Nuclear weaponry takes enormous amounts of power to run, even in stand-by mode, so the military has been looking for ways to cut energy costs. The military has been using renewable energy in other capacities for several years, including powering housing units and security fences at several domestic sites. The Air Force owns and operates some of the largest solar arrays and wind farms, both in the country and abroad.  The Air Forces is also using geothermal- and biomass-generated power at bases in Utah, Nebraska and Missouri.

But Bollinger said that the military does not yet have a top-down Pentagon-wide policy for the use of solar & other cleaner energy technology.

“It’s mostly by sub-agency, by base, or at the whim of officers on the ground,” he said. “I’m trying to change that and the Commander-in-Chief is also interested in doing that.”

For example, solar technology has been put to use in diverse, sometimes surprising ways, at many of its 750 bases scattered across the globe.  For example, forward operating base Headhunter in Iraq uses solar arrays to help power its gift shop, arcade, movie theater, internet cafe, and the restaurants operated by Pizza Hut and Dunkin’ Donuts.

“It seems there are more solar company reps here than soldiers,” one Lieutenant Harkin commented when asked about how PV technology has changed their operations. “Joking aside, it really has completely changed our supply operations. Getting a consistent fuel supply to power our 24-hour operation is enormously expensive and logistically its a nightmare.”

“It used to be we just put land-mines in the ground and forget about it. Now we can put these tiny, super-efficient PV panels atop the mines, run them altogether to a central battery. You barely see them.” Lt. Harkin said. “I mean, there’s all this sun hitting the ground all day, every day, and it was just going to waste. Why not put it to good use? We have the technology, right? Now it provides nearly 20% of our energy use at the forward operating base. All the while providing security by blowing up the bad guys. Plus the fuel we would would have had to ship in here can be used for reconnaissance missions or drones.”

But the new moves have not been without criticism. Even some large environmental organizations, who typically champion solar, have voiced criticism.

“We’re all about solar,” said Eric Sound of the League of Earthers, “but you can’t just put a yellow ribbon on a turd and call it Christmas.”

Bollinger responds to such charges by saying he understands the criticism, but thinks you have to take a holistic view.  “Look, the mission is number one. But if we can get the job done and save energy and money while reducing our carbon footprint, I say let’s do it. It’s a no-brainer and I’m sure tax-payers would agree. I think there is a kind of mental block when it comes to this kind of thinking, even in the military. I don’t buy into the view that things like nuclear weapons and bunker-busters can’t be made more sustainable. It’s my job to make sure the war-making ability of the U.S. is done in a sustainable manner.”

Others raised concerns from a national security perspective.  When asked about the potential threat posed by a failure of consistent sunshine, Bollinger said, “All those issues have been worked out, rest assured.  When the weapons are idle, we have back up wind power.  When the weapons are operational they will be above the cloud cover for much of the time, receiving even more direct solar input which provides more than enough power to to get it to where it needs to go.”

The China-based PV company Solar Winter was the first non-US company to get the contract for the solar-powered nukes.

“After we have successfully used them in the field, we will be looking to contract solar for all of our weapons systems, from factory to operations.” Bollinger said. “We will be looking widely with an open bidding process.”