Joel Francis vs. Charles Koch: An Update on the Prop 23 Debate Challenge 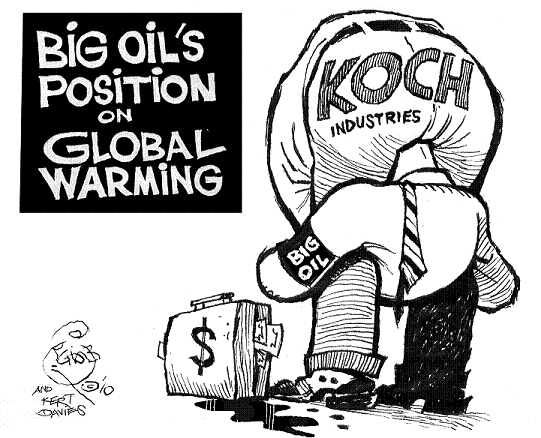 So the scenario I imagined yesterday did not come to pass.  No debate. Certainly no muffins. Who would have thought that Charles Koch, CEO of Koch Industries, would ignore Joel Francis’ challenge to debate him on Prop 23 or skip the opportunity to explain why his company is meddling in California’s clean energy future?

Rather than talk to Joel, Koch greeted him in a different way: by posting security at all office doors and by having him and other participants followed with plain-clothes security. Those on the scene said that Koch  employees in cars honked and shouted at Francis in an attempt to disrupt him while speaking. Joel gave the debate challenge letter to the head of security at Koch Industries’ headquarters, who assured him that his letter would be delivered to Mr.  Koch.

Being the second-largest privately-held company in the U.S., Koch Industries is not as well known as it should be.  They have been called the “kingpin of climate science denial and clean energy opposition.” They have been astroturfing tea party activity and have given big money to more politicians (both Republicans and Democrats) than you can shake a stick at.

So why did Francis bother going all the way to Kansas?

“As a  senior, I’m worried that the dirty energy initiative Mr. Koch is funding would jeopardize $10 billion of private investment in the state’s clean  economy and ruin one of Californian economy’s only bright spots. Many  of us who are getting ready to enter the workforce are looking to the  clean technology sector as a strong employment option,” Francis said.  “If Mr. Koch is going to come into our state with his money, a lot of  people would like to hear directly from him why he is trying to wreak  our economy’s development.”

Steven Maviglio, a spokesperson for the No on 23 campaign, concluded, “The point was made: This mysterious out-of-state oil company donates a million dollars to kill California jobs. Mission accomplished.”

In case you missed it, here is the challenge Joel laid at Koch’s feet: