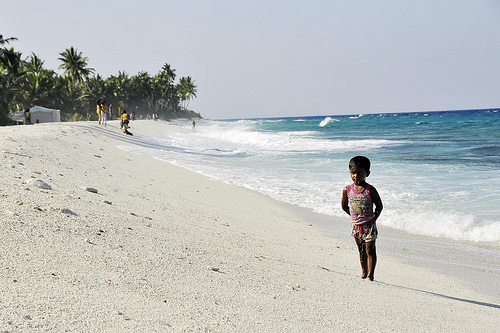 This post is part of our participation in Blog Action Day 2010, which is on the topic of Water.

We are all familiar with the fact that as our world warms, ice in the North and South melt and cause sea levels to rise. But there is another major factor causing sea level rise as well — water mining.

What is Water Mining?

Water mining is the pumping of large amounts of water from non-replenishing groundwater (also called fossil water) to the surface for human use. This is mostly done for crop irrigation. In recent years, we have been doing a ton more water mining than in the past and at clearly unsustainable rates. The rates at which we are pumping up this fossil water has more than doubled in recent decades.

A new study published in the journal Geophysical Research Letters finds that water mining, along with global climate change, is causing sea levels to rise.

“People are drawing so much water from underground that they are adding enough of it to the oceans to account for about 25% of the annual sea level rise across the planet,” Joshua Hill of our sister site Planetsave reports.

Of course, another big issue (as hinted above) is that unsustainable water mining, if not addressed soon, could lead to serious water and food scarcity issues as well.

For example, the Ogallala aquifer beneath eight US states helps to grow food for approximately 100 countries. About three feet of water a year is being pulled from it. About an inch is going back into it from percolation.

This aquifer cannot last for long at that rate.

This is especially a big problem in India, as I wrote last year, and for all the countries that rely on food and goods from India.

A key task of society is to implement more sustainable water practices. Ideas include moving away from water-intensive crops, using more grey water, conserving water, and implementing more water-efficient technologies. Hopefully we can do it.