Crush Dirty Energy Prop 23: A Video Round Up 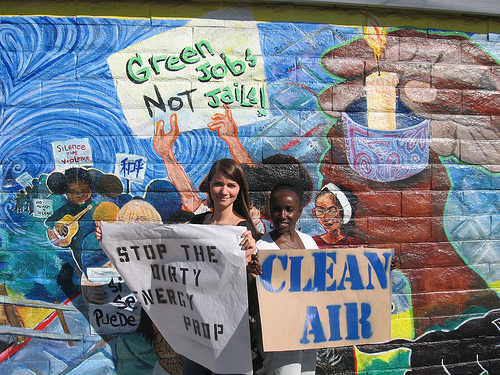 With just over two weeks left until election day, more and more Californians are pledging to vote no on Prop 23, the deceptive dirty energy prop funded by out-of-state Texas oil companies and the billionaire tea-party funding Koch brothers.

Several awesome videos have come out recently–some serious, some funny–but all getting the message out about the importance of defeating Prop 23 if we want to move towards a clean energy future.

The song “Valero Oil of Texas” was first performed at the Berkeley and Oakland rallies organized by the Credo Action/Greencorps folks, with lyrics written by volunteers Nancy Schimmel & Bonnie Lockhart.  Here’s a new video out with more instruments and professional production. It’s sure to go viral.

The Stop the Dirty Energy Prop folks asked Californians to send in photos of themselves showing their opposition to Prop 23.  Here is the resulting video:

Here’s one by Communities United Against the Dirty Energy Prop, based on an Ipad commercial:

This is one from the Credo folks to inspire citizens to donate a few hours to contact voters. They are running phone-banks just about every day.

Finally, The CounterParts, Otayo Dubb, Power Struggle, Somos One of BRWN BFLO, and Damn Pete of Think Tank thrown some tracks against Prop 23:

Plug into the campaign: Credo Action or Ella Baker Center.