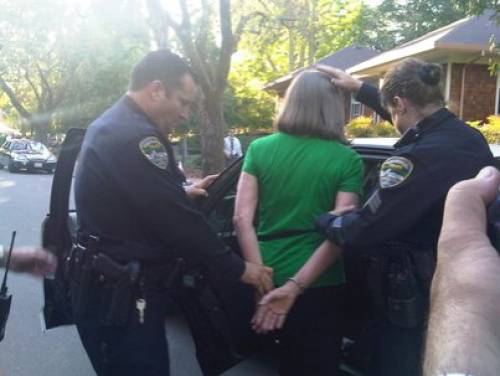 California’s Green Party candidate Laura Wells was arrested by San Rafael police after trying to attend the gubernatorial debates Tuesday night.  It was the last big debate between Democrat Jerry Brown and Republican Meg Whitman.  While the event was broadcast live from Dominican College in San Rafael, with Tom Brokaw moderating, it is not likely that very many people knew what was happening just outside the hall.

According to spokesperson Marnie Glickman, Wells had tickets to the event and was protesting her exclusion from Tuesday’s debate. Wells presented her ticket at the entrance and walked into the secured area. As she was about to enter Acacia Hall with the other ticketed guests, she was escorted off the steps by security and taken behind the hall.  Campus security said that she presented a ticket that was issued to someone else and that Wells was warned that if she did not leave she would be arrested.

Wells was then handcuffed and put in a San Rafael police car.  She was released with charges of trespassing on private property.  Wells’ court date has been set for Election Day, November 2.

“Republicans and Democrats will go to any lengths, even arresting candidates, to keep the truth from California voters,” Wells said following her release. “There are solutions, but voters aren’t being allowed to hear from independent candidates. Meg and Jerry will spend tens of millions of dollars in advertising but still won’t address the problems plaguing us. The debate is a fraud. Limiting it to Whitman and Brown is not just anti-green, it is anti-democratic and anti-republican.”

I like how one commenter named clsgis put it on the Sacramento Bee blog:

“Tickets are irrelevant if you’re a candidate who was excluded. Same thing happened to Ralph Nader every time he showed up with a valid ticket at a presidential debate. Excluded candidates are not allowed to sit in the audience because the TV producers need to show audience shots, and it would be too awkward to have an excluded candidate sitting there. Their faces are essentially banned images. Unlike the rest of the audience, they are unwelcome in the room.”

Check out a video of Marnie Glickman talking about the episode on the SF Chronicle politics blog.
Like us on facebook
Address: