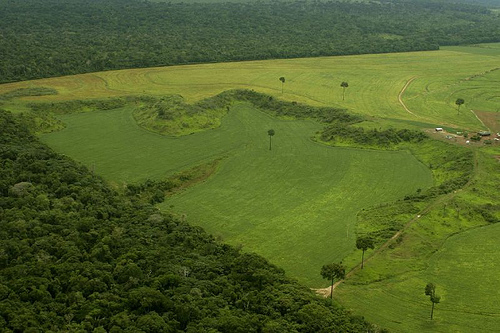 Data released publicly last Friday indicates that deforestation rates in the Brazilian Amazon were 47% lower in August of 2010 compared to August of 2009. Nice to hear that.

This information was released by Brazil’s National Institute for Space Research (INPE). INPE used satellite imagery and analyzed it with the Real Time Deforestation Detection System (DETER) to come to this conclusion. It found that “265 square kilometers of forests were cleared in August 2010, against 498 square kilometers during the same month in 2009.”

The coordinated work of the Ministry of the Environment, the Brazilian Institute of the Environment and Renewable Natural Resources (IBAMA), the Federal Police, and various government agencies is the reason for the drop in deforestation rates according to Environment Minister Izabella Teixeira.

Additionally, a new monitoring system, the Imaging and Radar Deforestation Indicator (INDICAR) is currently being developed to improve deforestation assessment under clouds, a major challenge since INPE began its monitoring in 2004. This system is expected to be ready for use in 2011.

What Are Other Sources of Decreased Deforestation?


Deforestation in the Amazon is created from a variety of players. However, less than 2 years ago, a report found that 80% of Amazon deforestation came from cattle ranching.

Less than a year after that, though, major international organizations and companies (e.g. Greenpeace, McDonald’s, Nike, Wal-Mart, and Carrefour) helped to get soya traders to implement and extend a moratorium on buying soya linked to Amazon destruction, and then they got the world’s largest leather exporter and the world’s largest meat exporter to back out of the Amazon as well.

I imagine these successes towards the end of last year have helped in reducing deforestation rates tremendously.

Of course, a reduction in deforestation rates is not an end to deforestation of the precious Amazon rainforest. Hopefully, it won’t be too long until we reach that critical goal.