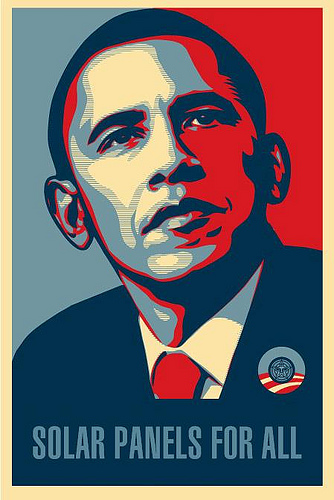 What do they say, April showers bring May flowers? How about September disappointment brings October surprise?

Let’s start with the surprise.  The White House announced its plans to install solar panels in the spring.  The solar installations will heat water for the First Family and provide a bit of the electricity needs of the White House (how much is not yet known).  According to the AP report, the White House Council on Environmental Quality Chairwoman Nancy Sutley and Energy Secretary Steven Chu will formally announce the plans later today.

Despite the fact that installing solar is certainly no substitute for pushing hard for strong climate and energy policies, it is not merely symbolic. When Michelle planted the White House organic garden, seed sales across the country increased dramatically (as did organic sales).  Though the White House garden certainly isn’t the only factor in those increases, strong images and leadership like that make a big difference.  We can hope that a similar ripple effect will be forthcoming in solar.

The reason it is a surprise is because of the disappointment in September many felt when the Obama administration refused to make a commitment to put solar on the White House when Bill McKibben and the Solar Road Show folks showed up with the solar panels. They brought with them a panel that Carter put up back in 1979 and that the Reagan administration subsequently removed in 1986.  The Solar Road Show was part of a larger campaign to persuade world leaders to install solar on their homes leading up to 10/10/10, the Global Work Party organized by 350.org.

I was part of a group that met with Bill McKibben at 350.org office in Oakland, CA a few days before they launched their road trip to the White House from Maine. I asked him if he thought the Obama administration would make a commitment to install solar. He said he didn’t know, that it could go either way, but was inclined to think they would decline. Turned out that was a level-headed prediction. But some of us said it seemed like a slam-dunk, such an easy gesture that didn’t require passing any legislation and it would send a signal to the base.

Why in the world would they refuse?

McKibben said he thought they may be sensitive to being associated with the Carter administration, especially during the run up to mid-term elections.  As he later put it in a Mother Jones article:

“They somehow believe the association with Jimmy Carter is the electoral equivalent of cooties; and that, in the junior high school lunchroom that now comprises our political life, they didn’t want to catch any…As we expected (but secretly hoped wouldn’t be the case), the White House didn’t commit to … well, anything. We tossed them a big, fat soft ball to hit out of the park and they just watched it float on by.”

So now they’ve decided to swing, perhaps understanding finally the potency of the symbol.

But in contrast to the image at the top, it’s not “solar for all” (yet) and Obama is not leading this, we are. While many of us would have liked to see this happen on Obama’s first full day in office, it is a strong signal for a renewable energy future. It is also a testimony to the strength of grassroots and clean energy folks who are doing the hard work of calling, writing, demonstrating, and otherwise making the voice for clean energy heard loud and clear.  We will keep pushing and it is a great morale booster for this weekend’s Global Work Party on 10/10/10, when people from across the globe will participate in over 6000 actions demonstrating local climate and energy solutions.

Read Bill McKibben’s take on the strange meeting in September.