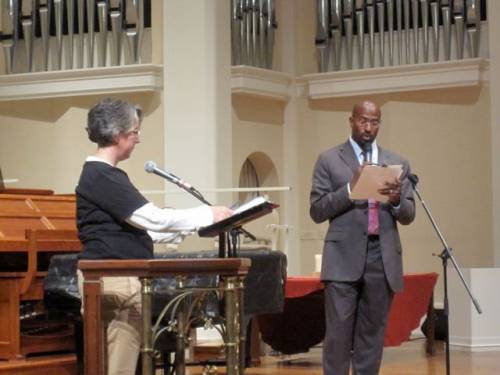 On Sunday evening Van Jones joined hundreds of San Francisco Bay Area residents at the First Congregational Church to call voters to urge them to vote no on Proposition 23.

Regular engaged citizens as well as luminaries like George Lakoff joined Van Jones, Michael Kieschnick (CEO & President of Credo/Working Assets), and Becky Bond (Credo Action’s Political Director) to make calls.  They all underscored the importance of not merely beating Proposition 23, but crushing it overwhelmingly. Organizers also emphasized that since voters can begin mailing in their ballots this week it is critical to contact as many as possible.

“This is not a fight we picked. They are on our turf, in our backyard, using our rules,” Kieschnick said of the out-of-state oil companies Valero and Tesoro and the billionaire Koch brothers.

Van Jones reminded the crowd of their recent history of mass mobilizing against the invasion of Iraq and on-going wars. “We’re getting the moment back for this movement,” Jones said. 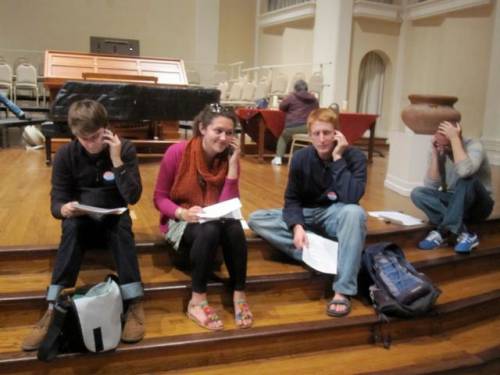 “These people are not spending hundreds of millions of dollars to crush your dreams because you suck. They don’t have lunatics on TV twenty-four-seven because you lack power.  They’re doing this because you do have power, you are a force to be reckoned with,” Jones said.

“Do you think they’re getting up in the morning trying to figure out how to create jobs for Californians?” Jones asked, then hilariously play-acted crying on the part of the CEOs of Tesoro and Valero.  The two CEOs put out an editorial on Friday complaining they were just so tired of being cast as villains, after even Schwarzenegger called them out for “self-serving greed.”

The words of Jones and Kieschnick rallied the crowd to action.  Out came the cell phones and everybody started making calls.  Volunteers made thousands of calls and had hundreds of great conversations about Prop 23.

As Kieschnick said, “The old guard oil companies won’t go easily into a future where they don’t dominate the energy scene. We have to win here, crush it here, or it is a big step backwards.”

Credo is continuing to contact voters everyday until election day. Consider plugging in whatever way you can, but the most effective thing is to call voters and get pledges to vote no and volunteer. So consider volunteering a few hours of your time to phone-bank.  That’s environmentalism in action.

Take Action: Go to the Credo Action Campaign site to find your local office and events.