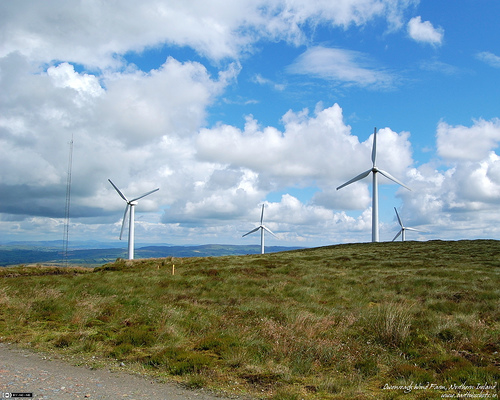 The country is reportedly producing 10% of its energy from renewable sources right now. In order to meet its goal of quadrupling that in 10 years, Northern Ireland is planning to put £1 billion ($1.58) into grid improvements. This is quite a lot for the small nation of Northern Ireland.

“This is a challenging agenda, particularly given the global economic downturn and its impact on Northern Ireland industry,” energy minister Arlene Foster says.

But Foster says the country is “well on track” to meeting its 2012 goal of 12% and is confident it can really speed up clean energy development to hit 40% by 2020.

“I fully accept the many challenges we face in balancing competing environmental and cost issues, in order to create a sustainable energy infrastructure that will support economic growth and provide for reliable and competitive energy markets for Northern Ireland,” Foster says.

This 40% target is not new — it was published in a consultation document last year. And while it is a clearly an important target for the nation, it is not a legally binding requirement.

It looks like Northern Ireland is quite serious about addressing climate change. Wish I could say the same for the United States. Maybe some day.