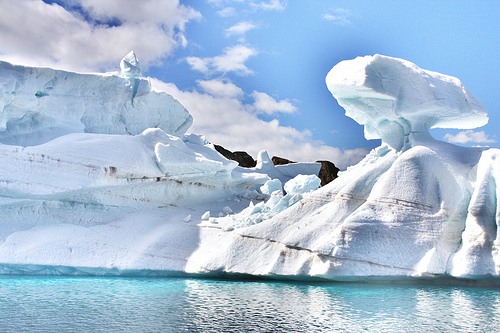 Floating nuclear power plants in the Arctic? Apparently, Russia is building them. And, luckily, there is nothing to worry about. “We can absolutely guarantee the safety of our units one hundred percent, all risks are absolutely ruled out,” a Russian spokesman for the project says.

I have to be honest, when someone says something like this is 100% safe, that only make me more nervous. We’re not talking about gravity here. We’re talking about a complex power plant floating in the Arctic. 100% safe?

Wasn’t the Titanic 100% “unsinkable,” according to its makers?

And where did the Titanic sink?

There might be a couple actual benefits of such a power plant, if it really doesn’t run into any problems. Jamie Friedland of Change.org writes:

Other than the obvious safety benefits of the Arctic Ocean (nothing ever sinks there…), you might be wondering why anyone wants a floating power plant. Well, for one, it does address NIMBY concerns. And on the technical side, there would be an ample supply of water to cool the plant (a recent report found that roughly half of the water America draws, more than 200 billion gallons per day, is used to cool power plants).

Of course, with the Arctic melting, many countries are looking to stake their ground there. Looks like its neighbor Russia is claiming some ground (er,.. water).

But things get even more intricate than that. There is a lot of potential wealth believed to be sitting in the Arctic:

The Arctic seafloor is estimated to hold vast supplies of mineral resources and large untapped reservoirs of oil and natural gas. Among the sizable yet unrecognized Russian claim beneath North Pole is a formation that could hold 75 billion barrels of oil.

Floating power plants would facilitate and accelerate efforts to reach these resources, which makes them well worth their $630 million-per-unit price tag. Russia is in a rush because the five Arctic nations (Russia, the U.S., Canada, Denmark, and Norway) have yet to decide what really belongs to whom. Extracting those resources first would anger other countries but make ownership a moot point.

Yeah, placing a nuclear power plant over an area packed full of oil might be one way to stake your claim. Of course, it could also make for quite a cocktail.

Friedland has apparently done his research on this topic, leaving me with the easy task of saying, lets look into this issue of 100% safety a little more closely:

To be fair, nuclear technology has advanced in the last few decades, and we have nuclear reactors at sea right now. Much of the modern U.S. Navy is nuclear-powered, and the Russian Navy is as well.

Yet there have been many accidents. The 2000 sinking of the Kursk was the most recent, but there have been dozens of other maritime nuclear accidents; the hulks of six nuclear-powered submarines (four Russian and two American) are already irradiating the ocean floor.

Without additional explanation, Russia has made the impossible claim that it has not only minimized the risks, but done away with them completely.

You can tell Rosatom, Russia’s State Atomic Energy Agency, to slow or halt this project by signing this petition: Not in Santa’s Backyard. And, an interesting follow up: Check out this 1976 AP article in the Palm Beach Post exploring the possibility of floating nukes in the U.S.

Very interesting stuff. But can’t say I’m 100% comfortable with the direction we seem to be headed in.

Again, if you’re not into this idea, Friedland has created a petition on the topic: Not in Santa’s Backyard.