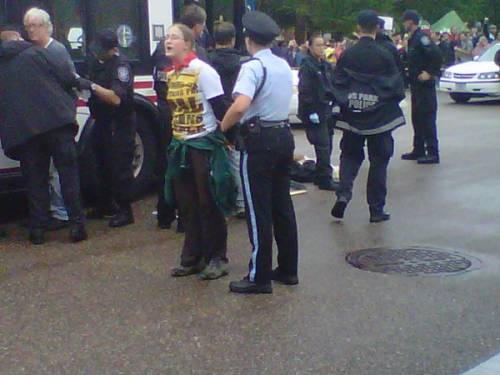 So chants the people gathered in D.C. today to demand an end to mountaintop removal mining.  Today’s Day of Action is the culminating event of Appalachia Rising’s 3-day mobilization.

In the morning, marchers first stopped at the Environmental Protection Agency with the message, “Do your job!” Here is a clip from the rally. The mobilization continued to the White House, where West Virginia resident Larry Gibson, climatologist James Hansen, and others addressed the people gathered.

“We cannot enrich the experience of a few at the expense of many,” Hansen told the crowd. Hansen, Gibson, and several others were arrested.

Earlier, members of the Quakers, Rainforest Action Network, and Appalachia Rising conducted a direct action at the doors of the PNC Bank, a key mountaintop removal financer (and TARP-funds recipient, by the way) in downtown D.C.  They were removed by police and arrested, including West Virginia resident and Appalachia Rising Coordinator Katie Rooth.  All the while, Reverend Billy Talen (of Church of Life After Shopping and What Would Jesus Buy? fame) gave a Sermon on the Mountaintop, after which he also was arrested. 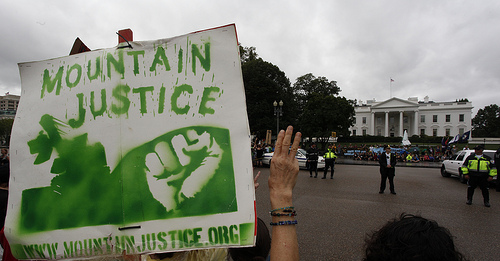 Reports coming in have said over 100 people have been arrested so far.

Dr. James Hansen, Appalachian residents and retired coal miners arrested are all calling for the abolition of mountaintop mining and immediate veto of Spruce mine project.

Follow @App_Rising and hashtag #apprising and #mtr for updates.