5 Reasons Why Californians Must Crush Prop 23 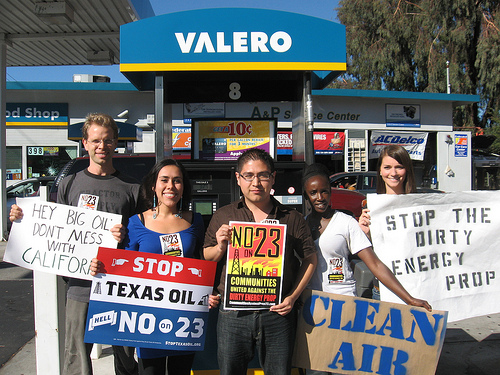 With the editorials flying off the press, the money pouring in, and the phone-banking and rallies heating up, most Californians are becoming aware of Proposition 23 one way or another. As I wrote last week, Prop 23 has become a lightning rod of debate about and a public test of support of a clean energy and air future of not just California, but of the nation.

It is called the “California Jobs Initiative” by its oil-slick proponents, despite the fact that it would reduce state revenue and stall the growing clean energy job sector.   If passed, the measure would suspend California’s landmark greenhouse emission reduction law AB 32 (Global Warming Solutions Act), one of the most ambitious in the world. Proposition 23 would halt implementing the law until unemployment in the California reaches 5.5 percent for a continuous year.

The New York Times called it a showdown, saying that it has “jolted environmental leaders who are worried that a vote against the law in this state — with its long history of environmental activism — would amount to a powerful setback for emission control efforts in Washington and statehouses across the country.”

And we all should be jolted.

On Friday, the L.A. Times reported that a poll about Prop 23 showed about equal support and opposition among voters who have taken a position.   So we have some work to do to get the message out and contact voters.

Here are the 5 top reasons why Californians must crush Prop. 23:

1)Prop 23 is a fraud perpetrated on the people of California by out-of-state oil companies and right-wing billionaires who want to line their pockets while they kill our clean energy future. That’s not hyperbole, that’s the game.  Texas oil knows what’s at stake so they are pulling no punches and letting the money pour in about as fast as the Deep Horizon leak. It’s no surprise that fossil-fuel industries see efforts to clean up our air and energy supplies as a threat to their bank accounts. Our ballot initiative process was meant to give ordinary citizens a voice in decisions affecting everybody.

Are Californians going to allow out-of-state interests manipulate them?

2)Prop 23 is an insult to the intelligence of the people of California. Every aspect of Prop 23, from its name “Jobs Initiative” to the language in the proposition itself, assumes Californians are simpletons who can’t see the real motivations behind this initiative.  The funders expect us to accept that they really have our interests at heart.  Who among us really thinks that out-of-state oil companies have a real interest in creating jobs for Californians?

Which leads us to reason number 3.

3)Despite its Orwellian name, Prop 23 is a job killer. It has already been shown repeatedly that clean tech jobs have grown at a significantly higher rate than other jobs.  If Prop 23 passes and AB 32 is suspended, investments, loans, and jobs in clean energy will shrink dramatically. Unless you think that building an economy based on oil-spill clean-up and doctors treating asthma is the way of the future, then its time to expose this one.  The supporters are relying on a climate of fear around jobs to push this through.

4)Prop 23 is a threat to state and national security. Just ask former U.S. Secretary of State during the Reagan administration George Schultz.  Schultz came out swinging with an editorial in the Sacramento Bee. He says, “Those who wish to repeal our state’s clean energy laws through postponement to some fictitious future are running up the white flag of surrender to a polluted environment.”

It is not that often a former ranking GOP official and Democrats and Greens sing in harmony. This measure indeed is making for strange bedfellows, with the likes of Van Jones and Scharzennegger on the same side.  But on Prop 23 they have united with the message:  clean energy, clean air, emissions reductions, green economy are all paving the path of a more secure future.

5)Finally, Prop 23 would limit California’s opportunity to be global leader on emissions reductions, clean energy, and energy conservation. Historically, California has often been visionary in its environmental protections and programs.  Sometimes we forget that we live in the 6th largest economy in the world and we forget that other states, indeed, other countries, often take cues from us.

All this leads us to the conclusion: in November we all have to come out in force and vote no on the Dirty Energy Proposition 23.  And we must not just beat Prop 23, we must pulverize it like the dust beneath our feet.  A mere 51% margin will suffice, but I say let’s beat it by 75% or higher to send the message that Californians are serious about conservation, clean energy, health, and a clean energy economy.

Plug in if you are able:

There are plenty of ways to plug into the No on 23 Campaign.  Spread the word, call voters by signing up to phonebank, or donate money to help with communications:

No on 23: Stop the Dirty Energy Proposition Campaign