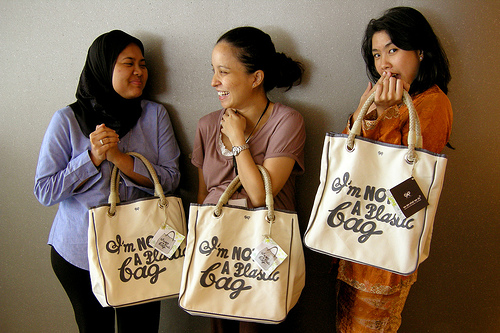 Only nine months after Washington, DC implemented a 5-cent plastic bag tax, plastic bag use has dropped about 60%! I think that is a surprisingly strong result.

“I am somewhat surprised by the extent to which people changed their behavior,” says acting director of the city’s Department of the Environment Christophe A.G. Tulou.

5 cents isn’t going to break anyone’s bank, and I imagine while some people are using plastic bags less to be more financially frugal, most of them probably just needed a little stimulus like this 5-cent plastic bag tax to do something they know they should be doing anyway for environmental reasons.

“Whether you’re pro- or anti- bag tax, this is a pretty striking example of how a small incentive (a nickel, in this case) can have a big influence on behavior,” Jacob Goldstein of NPR writes.

Plastic bags are, of course, having horrible effects on our planet and our bodies (such as cancer, obesity, infertility, early puberty, and perhaps even autism). Some places, like many states in India, Mexico City, IKEA, and other places, have decided to put bans on plastic bags. Others have made boats out of plastic and sailed them around the world to bring attention to the critical issue of huge plastic garbage patches in the Pacific and the Atlantic. And others have started turning plastic into fuel.

I think some of the biggest problems we will face in the years, decades, and centuries to come, will be all the problems created by plastic. The sooner we can cut it out of our daily use, the better. Nice to see this tax is making a bit of change in Washington, DC.