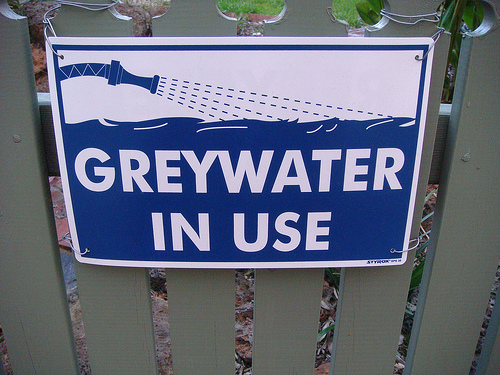 Visualize for a moment your morning shower. The warm water runs gently and momentarily over you, then falls to the drain. For several minutes it goes on its merry way to…well, to a place most of us rarely think about.  It simply goes “away” after our brief contact with it. Similarly, think about that last load of laundry you did. How much water did it take to complete these mundane tasks and where did it go?

Now imagine, instead of that water draining “away” to the sewer or septic tank, it was captured and reused. Imagine if those 15 to 50 gallons (depending on the type of washing machine) or 10 to 40 gallons (10-minute shower, depending on type of showerhead) of what’s known as “greywater” were re-purposed for something productive that also required water, say, growing food in your garden or irrigating fruit trees.

This is precisely what some 20 students participating in a greywater installation course in East Oakland learned to do. I checked in with the group on their final day.  I was so inspired by their work that I have signed up for my own laundry-to-landscape greywater workshop next weekend.

The five-day hands-on intensive workshop was taught by Laura Allen and Andrea Lara of Greywater Action, a San Francisco Bay Area organization dedicated to teaching people how to conserve and reuse water “for a sustainable water culture.” By the end of the week students had learned about different types of greywater systems, California’s new plumbing code, irrigation requirements of different plants and how to do on-site assessments and basic installations.

When I arrived at the Fruitvale home where the exam took place, one group of students was huddled around a washer in the basement.  A local volunteers their home for an installation and they pay only the cost of the materials.  The group was determining where to install a three-way valve, which allows the user to decide the destination of the used laundry water: to the sewer or to the landscape. 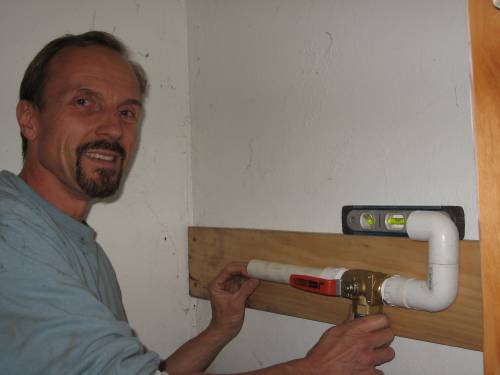 Students hooked the washing machine hose from the back of the washer to the three-way valve. They placed piping along the wall to a point where a hole leading outside will be drilled. From there, various irrigation hoses will be installed depending on the needs of the landscape.

“What’s great is how simple it is. You can come in, like me, with no plumbing background,” said Heidi Cunningham, who has worked at one of San Francisco’s newest urban farms, the Free Farm Stand. Cunningham wants to do landscaping and use a greywater system for personal home use and possibly as a business.

“The market is definitely growing,” she said. “More and more people are seeing its value.”

A basic laundry-to-landscape system does not require a permit, instructors said, unless you need to install an additional pump to the washer. The total cost is $700 to $1,500, less if you do it yourself and have your own tools. (Check out tool-lending libraries, like the Oakland Tool Lending Library to borrow what you need.)

Permaculturist and Planting Justice co-founder Gavin Raders also attended the course. He said greywater systems don’t exist in a vacuum, but are part of a holistic way of thinking about energy and food systems. Planting Justice incorporates greywater design into its green jobs training and edible landscape projects.

“It’s important to view greywater as part of an integrated design for sustainability in urban landscapes, ” Raders said.

“Using greywater would make a huge dent in the amount of fresh water that’s used in the first place,” said Christina Bertea, a plumber and Greywater Action member who served as project supervisor for the day.  She and Allen, one of the course instructors, referred to a 2009 report by the Institute of the Environment at UCLA called Graywater: A Potential Source of Water, that points to greywater systems as potential sources of significant water conservation.

“With only 10 percent of Southern California homes participating, the volume of water saved would be equivalent to the capacity of a modern, large seawater desalination plant such as those proposed for California,” the study concludes.

“It’s not just a water issue, but also an energy issue, a carbon footprint issue,” Bertea said, referring to the amount of energy it takes to pump water from the mountains and deltas to our faucets, much less the energy it takes to heat it. According to Allen, 19 percent of California’s electricity use is dedicated just to pumping our water. So any water that can be reused translates into energy savings as well as water savings. 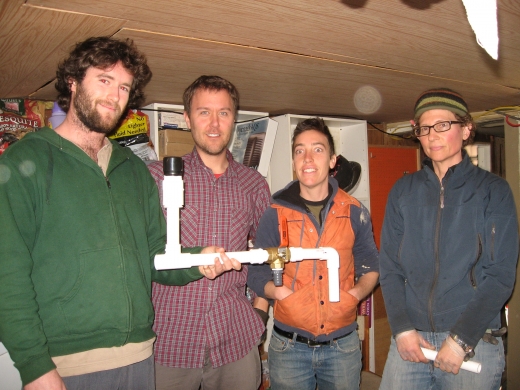 Currently plumbers tend not to be trained in greywater systems. Advocates like Greywater Action and a growing number of water conservationists are hoping to change that.

“Every landscaper, every plumber, should be certified or trained to install greywater,” Allen said.

And despite California’s plumbing code being updated last year to be less restrictive on greywater installations, there are still roadblocks.

“Right now, there are a lot of barriers,” Bertea said. “Not from politicians, but from the local regulators and plumbing offices,” which tend to stick to the book and are not versed in greywater uses, she added.

For greywater advocates, progress is a matter of education. It would be ideal, said Bertea, if every municipal water district offered greywater workshops.

Some cities are taking the lead in encouraging more sustainable systems. Allen and Bertea said Santa Rosa has offered a rebate for using recycled greywater on residential landscapes, the first city to do so after last year’s revised greywater code.

What do the students plan to do with their new found skills?

Elizabeth Powell of Quincy, Calif., hopes to do greywater installations as a side business and introduce it to her community. She explained that, in her rural community, the use of greywater will help extend the life of wells and septic tanks. 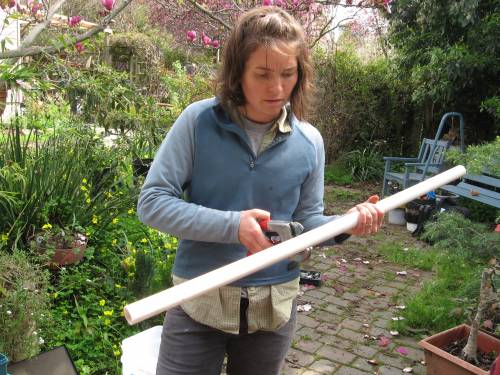 “The course was a great overview of the whole process, from irrigation assessments and calculations based on different plants’ use of water to different greywater systems. You get a lot of depth, much more than I expected. You even get into the business side, how to approach and explain things to clients, and also the new California code,” she said.

Another student, Matt Horn, runs a landscaping and tree care business in North Berkeley. A certified arborist with a degree in forestry, Horn plans to incorporate greywater as one of the services he provides to clients.

“I like the cross-pollination between planners, plumbers and landscapers,” he said. “I’m super alarmed at the water-scarcity issue in California. We have to completely redo how we use water.”

Greywater systems are not limited to home use. Brian Wentzlaff, who works for Hostelling International, intends to install a greywater system at its Point Montara Lighthouse quarters, then hopes to install systems at other locations.

Maybe the Greywater Action folks aren’t such radical plumbers after all, unless by “radical” one simply means getting to the root of the problem: the inefficient use of one of our most precious resources. In that case, we could use a few more radicals. 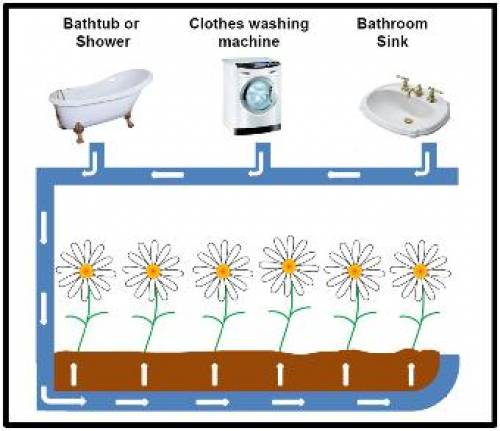 A version of this article first appeared on Oakland Local.