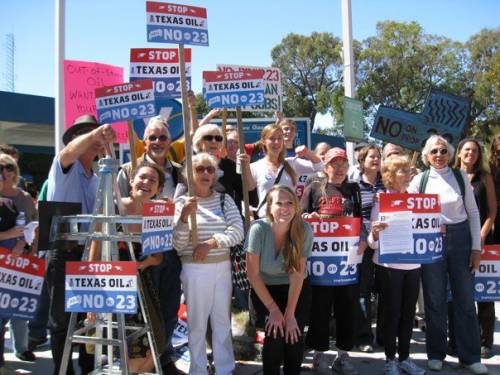 The first rally against Proposition 23 at the Valero station in Berkeley was a great success, raising awareness about one of the more deceptive propositions on California’s ballot this November.  The proposition would suspend AB 32 (Global Warming Solutions Act), the landmark greenhouse emission reduction law that was passed by the legislature and signed by Arnold Schwarzenegger in 2006.  The law is one of the most ambitious in the world and sends a strong message that California intends to be a world leader in emissions reductions, clean energy, and the green economy.

The Orwellian name given to it by oil-slick proponents is “California Jobs Initiative”, despite the fact that it would reduce state revenue and stall the growing clean energy job sector.  Opponents have dubbed it the “Dirty Energy Proposition” because both Texas Oil companies and the billionaire Koch brothers have chipped in most of the millions behind this attempt to kill clean energy investments and green jobs creation in California.

Come join two more rallies this weekend–one in Oakland and one in Richmond.

Protest Valero — The largest donor to the Prop 23 campaign to effectively repeal one of the world’s most aggressive laws to cap carbon and grow green jobs.

Protest Valero — The largest donor to the Prop 23 campaign to effectively repeal one of the world’s most aggressive laws to cap carbon and grow green jobs.