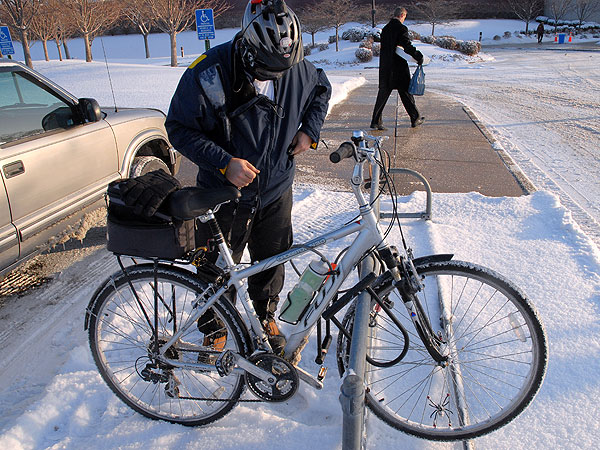 Despite harsh winters, Minnesota’s Twin Cities are known for year-round bicycle commuters.  A new bike-sharing program launched in the midst of summer has proven to be a success.

A new federally-supported bicycle sharing program in Minneapolis is doing well since its June 8 launch, adding to the Twin Cities’ reputation as a bicycle-friendly region. Nice Ride Minnesota is touting its success and encouraging additional ridership.

About 1,000 people have paid either the $50 student rate or the $60 general public rate for a year of unlimited rides in advance, while over 50,000 rides have been estimated as of Monday, August 23. A one-time ride is $5. Program backers hope the commencement of fall semester at the University of Minnesota will give a big boost to ridership.

Minneapolis received a $1.75 million federal grant to start up the service. Transit for Livable Communities (TLC), a St. Paul-based organization that promotes transit and sustainable transportation, passed on the grant through its Bike Walk Twin Cities program. TLC was designated by Congress to administer the Minneapolis-area location of the federal non-motorized transportation pilot program authorized by the last large transportation law.

The city has 84 miles of off-street bicycle paths and 43 miles of streets with marked bicycle lanes. Its neighboring twin city, St. Paul, has 101 miles of paved off-street trails and 30 miles of bike lanes.

Despite the area’s tough winters, Bicycling Magazine named Minneapolis the top Bike City in the U.S. In addition, there are dozens of trails available for recreational use across the state.