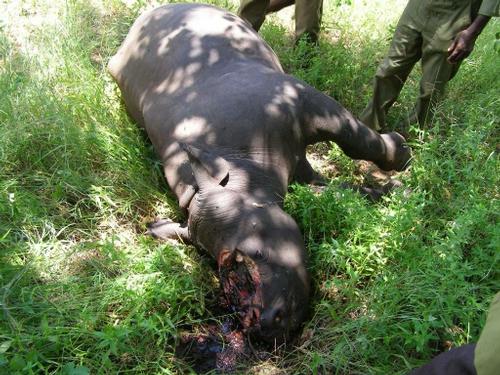 The Masvingo regional court has sentenced a member of the Mazhongwe rhino poaching gang to 17 years in prison for killing an endangered rhino.

Justice – at last: Zimbabwe rhino poacher Tichaona Mutyairi has been sentenced to 17 years in jail for killing a rhino and firing on police in October 2009.

After years of letting the killers walk free, could this case finally be the turning point in the war against rhino poaching in Zimbabwe?

According to allAfrica, Mutyairi and his two cousins, Samson and Ishmael Mazhongwe killed the rhino at Matendere Range with an AK- 47 rifle and then removed the rhino’s horn. During an exchange of gunfire with police, Mutyairi was shot in the abdomen.

The International Rhino Foundation and other conservation groups are hoping this case is a turning point for Zimbabwe’s dismal track record of convicting rhino poachers.

In one failed court case which conservationists found particularly disturbing, a Zimbabwean High Court judge granted bail to a group of poachers who were found with five automatic assault rifles and admitted to killing seventeen rhinos. This ruling overturned another ruling in a more junior court case in which captured gang members were released from jail until sentencing giving them the opportunity to immediately abscond. The same process was followed shortly afterwards in a similar case, allowing two Mazhongwe gang members to vanish into thin air instead of remaining in jail.

However, the chance remains that Mutuairi’s lawyer may appeal the case in another court and escape punishment.

While conservationists applaud the professional action of the Masvingo court and the police investigators who built the case against Mutyairi, they worry his lawyer will follow the route of appealing to another court. The financial power of poaching syndicates and the legal antics that have disrupted other convictions could still come into play in this process.

Indeed, political connections appear to be a factor in the lack of convictions. For instance, shortly after high-ranking political officials in Zimbabwe were implicated last year in a rhino poaching case, the court documents mysteriously “disappeared”.

A November 2009 report prepared for CITES noted that 26% of Zimbabwe’s rhinos had been lost to poaching, and 89% of critically endangered black rhinos illegal killed were from Zimbabwe.

Zimbabwe is now facing expulsion from the Convention on International Trade of Endangered Species (CITES). President Robert Mugabe is expected to meet with CITES secretary general Willem Wijnstekers this month to discuss the poaching crisis.

Wijnstekers has indicated that he wants to meet the defence minister because of the alleged involvement of senior army officials in poaching. He wants to meet the police commissioner and the attorney general to get a clear picture on the levels of sentencing imposed and also discuss what sort of deterrent measures can be put in place against poachers.

Recently, Zimbabwe war veterans were found to be poisoning rhinos in order to sell the horns to South African horn dealers.

‘War’ over rhinos in Zimbabwe

The Lowveld Rhino Trust noted that 130 rhinos were killed between 2008 and 2009, with the Mazhongwe rhino poaching gang responsible for at least 25% of the killings.

The Mazhongwe poaching gang, led by brothers “Big Sam” and Ishmael, are responsible for at least a quarter of these losses. Rhinos are killed for the sole intention of selling their horns on the black market, which are used in traditional Asian medicine to reduce fever. The willingness of emboldened poachers such as the Mazhongwe gang to fire upon law enforcement patrols that interfere with their hunt in Zimbabwe has resulted in a literal war.

How to help rhinos in Zimbabwe

As recently as the 1970s, there were 65,000 black rhinos in Africa. Today, the black rhino is classified as Critically Endangered, with a worldwide population of only 4,240.

Zimbabwe is home to the fourth largest population of black rhinos in the world – and the country’s population is in severe danger due to poaching for their horn.

To learn more about how you can help Zimbabwe’s wildlife, please visit Zimbabwe Conservation Task Force and the International Rhino Foundation’s Crisis Zimbabwe.

Last year, a comprehensive CITES report found that the main destinations for illegal rhino horn are China and Vietnam, where unfortunate Asian superstition attributes the rhino’s horn with “medicinal properties” – despite scientific evidence to the contrary.