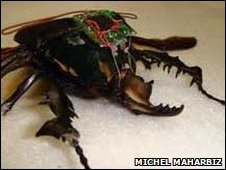 In what is being touted as the first time humans have remotely controlled insects, University of California at Berkeley engineers successfully implanted radio-equipped, “miniature neural stimulation” systems into flying beetles–most notably, the “elephant” beetle Megasoma elephas (pictured above), which can grow up to 20 cm (about 7 + inches) in length.

There’s just one problem: while the engineers are able to control the bug’s muscle movements, so far, the beetles can’t fly–due to the heft of the micro electronics “on board”. Further refinements will need to be made to these systems. Currently, tests are being conducted with miniature solar cells, piezoelectrics (pressure-generated electric power), and other micro-electro-mechanics (MEMs) to power these devices and minimize their weight.

The final step would be to equip the insects with miniature cameras and/or microphones. The “cybug” project (note: entomologists do not consider beetles to be true “bugs”; this is a colloquial term) is being funded by DARPA (the U.S. Defense Advanced Research Projects Agency) in the hope that one day the insects might be employed on the battlefield (e.g., to spy on troop movements) or perhaps even sent to spy directly on military commanders’ strategy meetings. The chief engineers at UC Berkeley for this cybernetic insect project are Michel Maharbiz and Hirotaka Sato.

The implantable devices consist of three electrodes, a micro battery, and a micro controller, which can then receive signals from a remote operating system, such as a laptop. Other beetles used in these experiments are Cotinus texana and mecynorhina torquata (2 cm and 7 cm respectively).

In a recent BBC feature, it was suggested that one other use for these cyborg beetles–admittedly an illegal one–could be as carriers of chemical or biological agents for targeted assassinations.

At this point, one might be reminded of the fictional use of dolphins depicted in the ’70’s era film Day of the Dolphin. That movie prompted widespread ethical concern over the use of such highly intelligent animals for such draconian political and/or military purposes. Are insects–perhaps the most despised/feared animal form on Earth–worthy of the same ethical concern and treatment?