2 Rhinos Killed in Kaziranga By Poachers Posing As Park Visitors 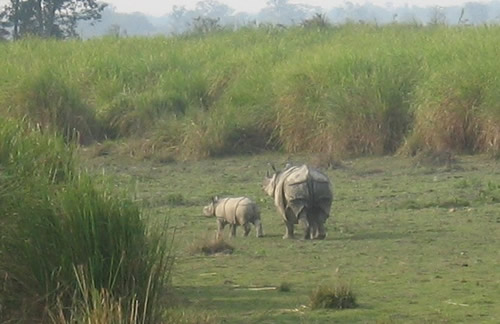 Two greater one-horned rhinos were found murdered with their horns missing inside India’s Kaziranga National Park – and authorities believe it was the work of poachers posing as park visitors.

Forest guards covering the Agartoli range of Kaziranga National Park have discovered the bodies of a male and female rhino – both with their horns removed.

Sadly, this is not the first time rhino poachers have acted as tourists to gain access to rhinos. In October, forest officials halted elephant safaris in Jaldapara Wildlife Sanctuary when it was found that poachers were acting as safari clients to locate greater one-horned rhinos deep in their forest habitat.

PTI reported that a “massive search operation” is now on to apprehend the poachers – who have raised Kaziranga’s 2009 rhino death toll to 14.

The officials said the poachers had entered the park posing as visitors and killed the female rhino last night. The park authorities have launched a massive search operation to nab the poachers.

Earlier this month, forest guards were also said to have killed two poachers inside the park.

According to a recent report prepared for CITES, Kaziranga National Park is home to the largest greater one-horned rhino (Rhinoceros unicornis) population in India, and has experienced an average population growth rate of 3.4% per annum. As of September 2009, the park’s rhino population stood at 2,048, with the total in India at 2,800.

Although the greater one-horned rhino was recently re-classified by the IUCN Red List of Threatened Species from Endangered to Vulnerable, the current surge in illegal rhino killings threatens to undermine years of rhino conservation success.

The illegal killing of rhinos for their horns has escalated to alarming numbers in recent years, due to an insatiable demand mainly from China (and increasingly, Vietnam) where unfortunate superstitions tout rhino horn as a remedy for common ailments, such as fever. The rising personal incomes and “new wealth” in these regions have proven to be a deadly combination for rhino populations in both Asia and Africa, now that an unprecedented number of people are eager to pay high sums of money for illegal products derived from endangered species.